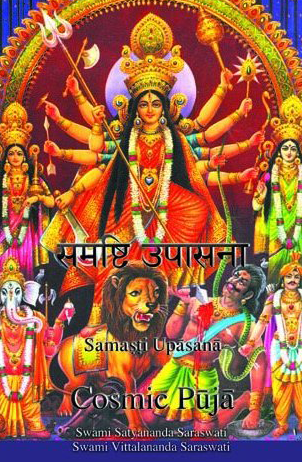 The Samashti Upasana or Cosmic Puja, is the meditation and worship of all the forms of divinity in existence; all the deities of the universe. Pu is punya, which means merit. Ja is jata, which means giving birth. Puja is activity that gives birth to merit. The action of the greatest merit is to guide one’s awareness into the presence of God and to maintain that presence for as long as possible.

Through puja we offer all that we possibly can to God and thereby experience peace. This worship is intended to lead us to that objective. Swami Satyananda Saraswati has translated the Cosmic Puja so that we may use it to instill within us that quality of true reverence for all of life in which we actually pay attention. By performing this worship we become so absorbed in the union between the perceiver and the object of perception that we go beyond all duality.

Derived from the Chandi Path, the Cosmic Puja describes methods of worship the Divine Mother in her forms as Mahakali, Mahalakshmi, and Mahasarasavati. Included is the “Panch Devata Puja,” the worship of the five divisions of the Hindu Dharma: Shiva, Shakti, Vishu, Ganesh, and the nine planets.

Other pujas in this book include: bhuta shudhi (enlivening energy centers), the Yantra Puja, Agni Prajvalitam (enkindling of sacred fire), the establishment of the Sanskrit alphabet in the body, the establishment of life, worship of the Divine Mother’s body, the worship of her divine weapons, and much more. This book is an anthology of practices which accompany and augment the Chandi Path and it comes complete with original Sanskrit text, Roman transliteration, and English translation.