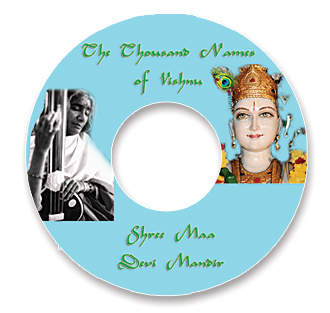 Shree Maa has been devoted to God from her childhood. Leaving home at an early age, she performed sadhana in Kamakhya in the regions of the Northeastern State of Assam in India.  She sat for most of this time in the silence of deep meditation, speaking very little and eating practically nothing.  Her sustenance consisted of sandal paste mixed with water, a bit of turmeric root, holy basil leaves, and occasional juice fed to her by devotees. Her body weight reduced to little more than sixty pounds. People who saw her in deep communion with God for hours and days at a time called her the Goddess of the Mountain, the Goddess of the River, or simply Shree Maa, the Respected Holy Mother.
After several years of deep meditation she began to roam throughout India, worshiping in temples, forests, fields and homes.  And she began to sing.  Sometimes she would sing all night, and devotees would gather to be in the presence of this holy woman whose entire life is worship.
In 1984 Shree Maa came to America, where she lives a simple life dedicated to daily worship.  Fame and wealth could easily be hers, but she wants nothing to do with them, preferring to own very little and to offer all to God.
Like Ramprasad, Shree Maa declines the offers of temples and ashrams, preferring the solitude of her spiritual discipline.  She chooses to spend her days in worship, meditation and service, teaching that all the acts of life can be service to God and expressions of devotion. Shree Maa’s realization is an example, an inspiration, a gift.  Like Ramprasad, her bhava comes from pure intuitive experience.  Her message transcends all boundaries as she builds bridges across continents, cultures and creeds.

Swami Satyananda Saraswati is considered to be one of the foremost Vedic scholars and Sanskrit translators in the West. He is the author of nearly 60 books in nine different languages representing a significant contribution to the understanding of Hinduism and Vedic religious practices.
Swamiji comes from the Dashnami lineage of Adi Shankaracharya and belongs to the Saraswati tribe of renunciates and scholars.  Saraswati sadhus worship with both spiritual knowledge and devotion, and they live the lives of teachers and knowers of wisdom.  Swamiji’s Guru, Swami Amritananda Saraswati, initiated him into Vedic Knowledge and Sanskrit  and the Chandi Path and sacred fire ceremony as his primary system of spiritual discipline in 1971.
Swamiji walked the length and breadth of the Himalayas for 15 years, during which time he fell in love with Sanskrit and became proficient in numerous languages including Hindi, Bengali, and Urdu.  He practiced intense spiritual austerities, chanting the Chandi Path naked in the Himalayan snow and in the hot springs of Bakreswar.  Wherever Swamiji went he would learn the local systems of worship and inspire those around him to join in the joy of selfless devotion.
In 1979, Swamiji met Shree Maa when he was performing a vow of worship in a small temple in the interior of West Bengal. They subsequently toured India, sharing their divine love and inspiration by performing pujas and homas,  and sharing their realization by openly teaching their methods of spiritual practice. In 1984 Shree Maa and Swamiji came to America and established the Devi Mandir, where they shine their beacon of light from Napa, California.  Today, they work tirelessly to give every individual the opportunity to access these spiritual teachings.

By Kailas
Heart stirring and clear, Shree Maa’s voice resonates with pure love of her Lord Shiva. This CD is a classic of devotion, and brings the listener into a deep state of meditation.

By Hari
This rendition of Vishnu’s Sahasranam is sooo beautiful! It is soft and sweet and it clears and brightens the chatter of my mind after a hard day’s work.