While we were in Yamunotri, our dedicated guide, Prashant, told us that a police lady had seen us enter the temple in the early morning. Later during her rounds, she was surprised to see we were still there. Again, near the end of our sadhana, she saw that it was five or six hours later, and still we were there chanting!

When she saw Prashant, she asked him, “What are they doing, why are they chanting so long, for what reason are they doing it?” She was so surprised to see two foreigners performing such a long worship, that she had trouble trying to figure out what she even wanted to ask.

When Swamiji heard the story from Prashant, he thought about it for some time, and this is the answer he gave:

Those who sit for a short time, invite God to come into their lives.

But those who sit for a long time, are praying to God to allow themselves to move into God’s life, and this is really our goal.

We often think that if God would grant our desires, we will achieve happiness.

Ultimately though, we come to the true understanding that if God would take away all of our desires, then we will achieve real happiness — Peace.

Once we decide that moving closer to God is the goal, we recognize there are four steps to its achievement: 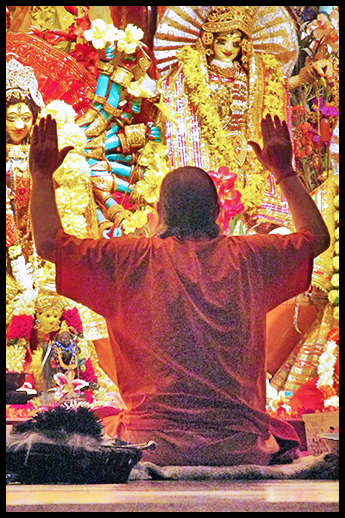 We must first perfect our sitting posture, and our comfort zone, so we can stay longer and longer with God.

One should strive to sit still for at least four or five hours, in one sitting, every day.

The longer we stay in one posture at the altar with God, reciting scriptures, thinking about Godliness, and thinking about people who achieved Godliness, the less scope there is to create any more bad karma for ourselves.

So long as we are sitting still, we can’t get into any more trouble.

So in the first step, let’s try to achieve Asana Siddhi and be able to sit with God for longer and longer periods of time. 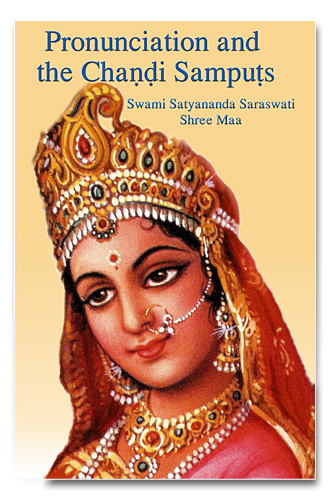 The second thing we want to have is Spashtha Ucharan. We want our pronunciation to be of words, not just making sounds when we chant.

We want to read words and sentences. We want to recognize the words we are pronouncing, while making our breathing regular through pranayam. In this way, we can sit for longer periods of time.

Then, we get the opportunity to move to the third step, which is understanding what we are saying.

(Note: Swamiji’s book Pronunciation and the Chandi Samputs is a “must read” for serious students of Sanskrit. It discusses the differences in Sanskrit pronunciation, the origins of these differences, various methods of chanting, the history of Sanskrit literature, and the original of Roman transliteration.)

3. Understand the Meaning of the Scripture we are Chanting

When we recite scripture, we are studying the history of what other realized beings did in order to achieve their greatness.

We are reading stories and prayers and other literature which can inspire our greatness.

In order for the information to be useful, it is desirable to understand what it means — not just the words — but the real meaning, the intrinsic meaning.

Only then can we contemplate how to inculcate the meanings in our lives. This moves us to the fourth step — aligning our actions with the meanings.

As we come closer and closer to the path of Godliness, it becomes more natural to act with the greatness of the examples that we have studied.

We begin to act as they would have acted under similar circumstances.

Ultimately each of these great beings was left only with one desire — to be with God, and they spent more time sitting in ultimate communion.