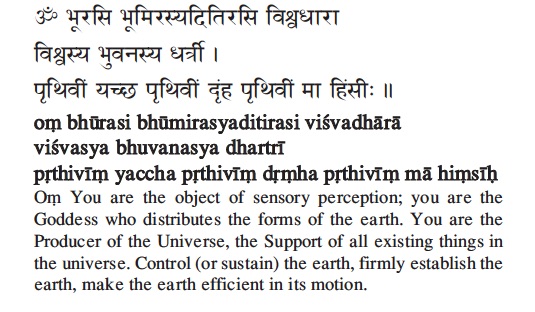 Listen to the audio:

Om You are the object of sensory perception; you are the Goddess who distributes the forms of the earth. You are the Producer of the Universe, the Support of all existing things in the universe. Control (or sustain) the earth, firmly establish the earth, make the earth efficient in its motion.

*Note: hiṃsīḥ could also be from the root “hi” meaning to “set in motion” and the word “mā” has various meanings. Hence, the words could also be explained as “make the (earth) efficient in its motion.” as for the translation of the verse above.