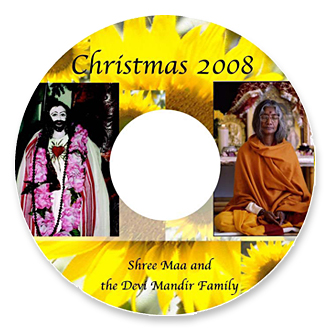 For Christmas, Shree Maa and Swamiji have a program that is very unique and special. This is a collection of songs that are sung during the program. It includes traditional Christmas songs such as “Little Drummer Boy” and “Silent Night” as well as songs in Sanskrit that are dedicated to Lord Jesus. Nowhere else will you find such an eclectic mix of Christmas delight.

By Abby
What a sweet and jolly CD to have around during the Christmas holiday! It is such a treat to hear how Shree Maa unites traditions and brings together all walks of life. Shree Maa, Swamiji, I love you!