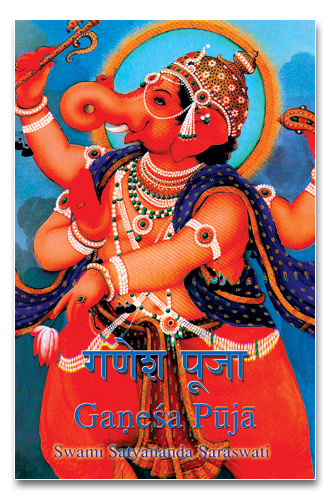 Ganesha is the first son of Shiva and Parvati. He is the Lord of the Multitudes. He is the door-keeper; he holds the key to the inner sanctum of the heart, where the Divine Mother resides. He is the first to be worshipped so that the endeavors we embark upon are free of obstacles.

The Ganesha Puja presents a philosophy that we can practice. It is a great place to start learning puja, and a wonderful doorway into meditation and worship. In addition, at the end of the book, Swamiji has included an article addressing the 36 principles of Tantra philosophy and how they relate to Yoga, Karma, and ultimately how to retrace our steps from the manifest back to the unmanifest. It is true that without Wisdom, it is impossible for any seeker to unlock the doors to the secret of Enlightenment.

Here’s What People are Saying…

“Swami Satyananda is one of the foremost teachers of bringing the system and techniques of puja to anyone who is seeking to know it. Ganesha Puja is a very straight forward easy to understand text. The sanskrit is broken up in a way that is pronounceable, and the feelings of euphoria and peace are inherent in the ease and flow of the presentation.” ~ Dan

“The Ganesh Puja has the Puja Vidhi for Ganesh, Ganesh Atharvashirsham, Ganesh Chalisa and a beautiful explanation of philosophy too!!! It is really beautiful to invoke and live in the presence of He who removes all obstacles from the path of a spiritual seeker. I strongly recommend it to anyone who want so start learning puja and also to seasoned pujaris!” ~ Robert Gotten

“I love Ganesha and have been collecting books about Ganesh that last few years I stumbled upon this book from shreemaa.org bookstore and I absolutely love it!” ~Beth Carmen

“I am doing the Ganesh puja with my little 8 year old daughter and she just absolutely loves it! It is fun to read the translations and I am happy to share my traditions with my child.” ~Roopa Mittal

“Even though I have been worshipping Ganesh from my childhood I never saw the Ganesh Chalisa till I got this text. What a beautiful addition to an outstanding puja book. I enjoy doing this puja as well as chanting the Chalisa! Om Gam Ganapataye Namaha!” ~Manohar Kaushal

“Great resource for Ganesh lovers and all lovers of God. The puja is simple and yet beautiful and very uplifting.” ~Ramesh Chand