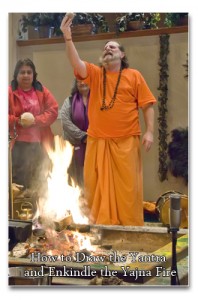 An instructional video by Swami Satyananda, one of the foremost authorities on performing yajnas, on how to draw the yantra inside the hawan kund (fire pit) and to start the fire to perform any yajna.

Swamiji is the foremost expert in the West on the rites of Yajna, and his instructional video is a must-see for all who seek the deeper understanding of Yajna and Homa.