On January 10, 2015, Shree Maa and Swamiji invited the divine energy of Kali Maa by establishing life (prana pratistha) into a new Kali murti at the Hindu Temple in Sunnyvale, California.

Little did the temple know that they had also invited the Divine Mother in the form of Shree Maa Herself! The temple devotees who had invited Shree Maa were deeply humbled by Her presence, articulating, “When we invited you, we did not expect that you would really come!”

Shree Maa and Swamiji wasted no time — springing into action, Swamiji began the establishment of the murti, while Shree Maa, with the help of Her devotees, dressed Kali Maa with a new red sari and dazzling jewelry to honor her divinity.

With rapt attention and complete efficiency, Shree Maa and Swamiji transformed Her into a living Goddess! 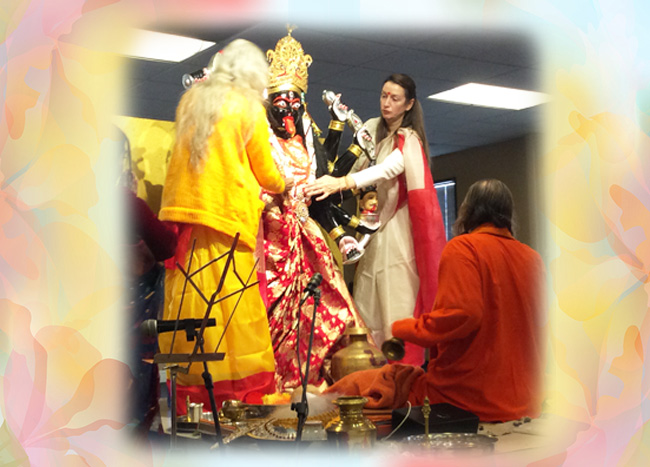 Once Kali was dressed and established with life, a TV news anchor from INDTV USA news requested an interview with Shree Maa and Swamiji.

This proved to be an inspiring opportunity for everyone to reflect deeply on the meaning of the Kali Puja which Swamiji had performed, and to listen to an example of the kind of passion with which one can approach puja in his or her own daily life. 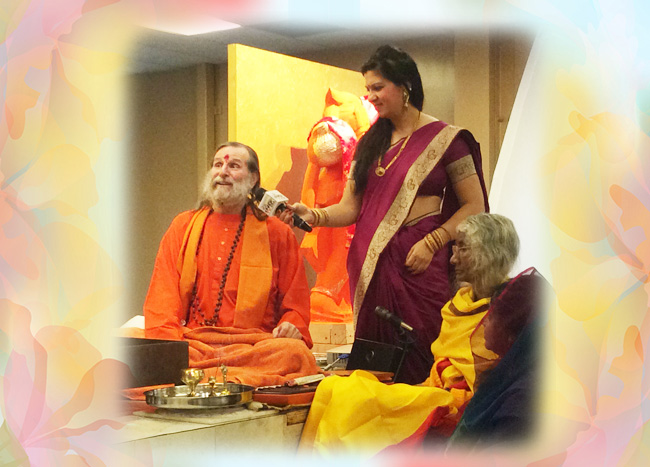 The astute newscaster asked Shree Maa and Swamiji several questions ranging from the meaning of sacrifice (a theme important to the worship of Mother Kali), to how asana, yoga and pranayama can help us achieve a spiritual connection.

Then, bringing attention to the rarity and importance of the occasion, the interviewer also asked Swamiji to explain the significance of Kali Prana Pratishta and why is it considered to be a rare moment or a lifetime opportunity for many devotees.

All present listened intently to Shree Maa and Swamiji’s golden nuggets of wisdom:

“Sacrifice means to give up something. Samarpan means to have nothing to give up. It means to be in balance and equilibrium. To be in the perfect stillness. And that is what we call samarpan.

Samarpan is a little different from tyaga. In order to give something away, you have to get it first, and that requires a lot of different activities. But samarpan means, I’m just remaining in peace and in that balance, I offer myself.”

… On Asana, Yoga, and Pranayama

This is Ashtanga yoga, the eight steps of yoga:

Samadhi is the ultimate of Ashtanga, the completion of yoga.”

… On The Benefits of Praying to Kali

“I pray to you all, please pray to Her.

She is Kali, She will take away all of our darkness.

Please remember to pray to Her and you will get light.”

“When we establish life, it’s called prana prathista. We take our prana, and we add it to Her prana, so that it remains with Her for Her entire existence.

That’s what separates, or distinguishes, a murti from any other lump of clay. She has been invited to be the recipient of our energy, of our prana, of our devotion, of our bhakti.

She will contain that devotion and preserve that devotion so that any devotee coming to visit this mandir will see Her as the emblem, who has been worshiped with love, with attentiveness, with wisdom, with consciousness, with understanding.

That is what they will take away from the temple.”

When the interview was complete, Swamiji led the devotees outside to the homa (fire ceremony) and offered them a seat across from the havan kund.

As Swamiji started the homa, suddenly the crowd of devotees in the temple and around the homa kund multiplied, as if they were drawn intuitively to Swamiji’s worship of Kali Maa.

The sincerity and focus with which he offered his oblations to Kali Maa brought utter stillness amongst the many people who had gathered.

As I watched Swamiji perform the homa, it occurred to me that this was a very rare and special darshan. It was an unforgettable homa, which stirred the soul of all who participated.

When the fire expanded into tall flames, in perfect measure with Swamiji’s own energy and devotion, those seated near the fire offered pure oblations of their devotion as they chanted the mantras of the Kali Sahasranam (1,000 names of Kali).

Many devotees sat still in humble prayer as they watched Swamiji, who with complete focus and dedication, finished the homa despite the intense heat from both the scorching sun, which intensely blazed down onto him, and the homa fire itself.

The temperature became so hot that not only did Swamiji’s iPad overheat and shut-down, but also the glue on the bookbinding of two Kali Puja books melted, causing the books to fall apart. But Swamiji didn’t miss a beat — he kept going despite all of these obstacles!

Some people cried with devotion. Everyone meditated in awe of the spiritual presence of Shree Maa and Swamiji. For many devotees of the temple, it was the first time they experienced a puja and homa being performed the same way it had been done by the rishis long ago.

Upon completion of the homa, Shree Maa and Swamiji returned once more to sit beside Kali Maa inside the temple. Singing the arati hymns of praise, they led the crowd of over several hundred in the offering of light, song, and dance to Kali Maa. 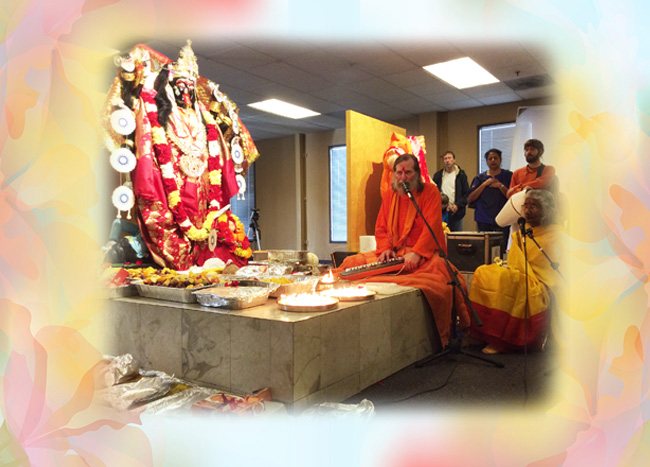 As Shree Maa sang “Kali Bhavani, Kali Bhavani!” she spontaneously stood up and danced through the gathering of people, inviting them to sing into the microphone and share in the joy of worship for Kali Maa.

It was as if Kali Maa herself had come down from the altar to dance with and to inspire Her devotees!

Not only was Kali Maa established with new life, the entire crowd became jubilant with enthusiasm to worship Her! And isn’t this what worship is all about? Shree Maa and Swamiji continuously give the gift of love and spread the joy of worship so that everyone they meet gets infected with the ecstasy of devotion.

Now it’s your turn to get infected — join in the celebration with this captivating video:

Experience the Bliss of the Divine Mother! Watch Now!

The spiritually awakened Kali Maa in Sunnyvale was an inspiration to everyone in attendance, and will certainly inspire all who continuously offer their sincere devotion through worship.

Class is held every day in the morning and evening at 8:00a (PST) and 8:00p (PST). Please see the classes & join us at Daily Satsangha – Morning & Evening