When life places obstacles in our way to God, the sincere longing to manifest divine love transforms the obstacles into opportunities.

Every difficulty becomes a creative exercise of offering our devotion to God. The objects used in worship are only important insofar as they inspire love and provide upliftment.

When we do puja just for the love of doing puja, all the necessary articles appear of their own accord. Swamiji’s life is full of such examples. He says, “The miraculous became the rule, and the exceptions were a minor diversion, an opportunity to find God’s Will and make it manifest.”

Swamiji has made puja as a way of life. He looks at every action he performs as an opportunity to remember God and offer the highest attention and respect. Numerous accounts of Swamiji’s tapasya in India are documented in the book Sahib Sadhu.

Some stories are included in Richard Oddo’s books: Visions Eternal, and Within a Miraculous Realm. Prabhat Kumar Mukhopadyaya also has written a book in Bengali called Saheb Sadhu. There are articles in various magazines too numerous to count that also share stories of Swamiji’s sadhana.

While traveling in India, Swamiji followed the footpaths along the rivers, and had a regular practice of finding an appropriate looking stone, turning it on its end, and performing the entire Shiva Puja, making offerings with leaves or pebbles. 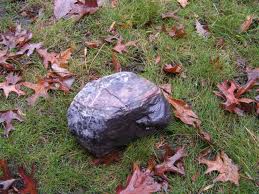 On several occasions, Swamiji would sit under a tree nearby the entrance to a school, put his yantra on a towel, and perform the entire Chandi Yajna, placing a handful of dried flat rice on the yantra for each offering in the text.

For the purnahuti, the final oblation, he would pour in some salty kunchi munchi snacks, mix them together, and when the kids came out from the school, he would give each one a handful for prasad.

When Swamiji wanted to perform a Sahasra Chandi yajna, 1,000 days of continuous recitation of the Chandi Path, he needed a place to perform it, money to fund it, a supply line for flowers and groceries, and a visa in order to remain in a foreign country.

First he needed the money. When he got the money, he couldn’t find a temple available to use; when he found a temple, his visa ran out. After many setbacks, he decided, “I don’t care if I do this in jail, I don’t care if I starve to death, I don’t care what happens! I am just going to sit down and chant the Chandi every day for 1,000 days!” 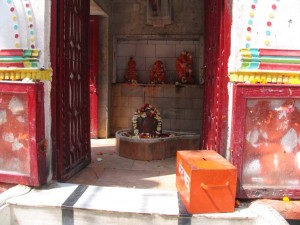 After the first few days of constant worship, some people from the village saw Swamiji worshiping and were inspired to bring him flowers every morning and some food every night. After word spread all around the village, the police chief came to see what all the commotion was about.

He was so impressed by the sincerity and loving devotion of Swamiji’s worship, that he ordered the other policemen, “Leave this guy alone. ”

The entire village was uplifted and enriched by the presence of Swamiji’s intense love for the Divine Mother. All the necessary ingredients appeared to fulfill Swamiji’s pure desire to complete the worship.

Finally, Swamiji finished his 1000-day vow, at the end of which, Shree Maa came to the little temple in which he was worshiping. His unswerving determination created the circumstances to support his intention.

There was another incident when Swamiji and his disciple Sushil were worshiping on the bank of a river in Bodhgaya. They gathered leaves, and drew a yantra in the sand. They began their worship, offering leaves to the yantra, singing the mantras of the Chandi Path. They sang all day long. In the evening, someone arrived and put a pot next to their pile of leaves. Swami asked, “What is that?”

As he turned to look over his shoulder, Swamiji saw the entire village standing behind him.

“Prasad,” replied one of the villagers.

Fuel on the Fire 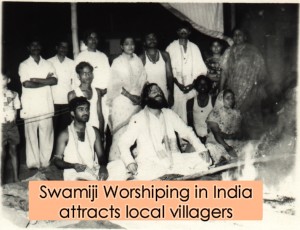 In Kandi, Sri Lanka, Swamiji began a fire with one small bundle of twigs, but when the priests saw him inviting the fire with such energy and conviction, they quickly told the tea plantation coolies to bring more wood so that the yajna fire would be much larger and last for hours.

Once the villagers heard about Swamiji performing a fire ceremony in the temple, hundreds came to offer grains into the roaring fire with thousands more chanting in the background. The infectious devotion spread everywhere Swamiji went.

In Gaya, Swamiji found a banyan grove near the banks of the Ganga. He felt that it was an ideal place to worship the Divine Mother for Navaratri. He was equipped with a small amount of wood, a bell, a glowing oil lamp with a wick, a bit of camphor, and some incense. 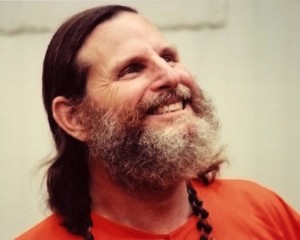 On the 8th day, the celebration for the auspicious Maha Ashtami, Swamiji lit the sacred fire. As he was chanting the text of the Chandi Path with Samputs the fire was dwindling. Just then, two men arrived carrying bundles of wood.

Swamiji stoked the fire and the flames grew as dusk fell on the banyan grove. Soon after, another group of men arrived with railway ties that they crisscrossed over the fire so that it grew into a huge bon-fire. By this time, the flames were well above Swamiji’s head.

As night descended, Swamiji’s chanting of the Navarna Mantra was accompanied by a growing chorus of people who were drawn to the worship of the Goddess. The voices grew louder as more people came, and soon it became a roar of voices that resounded through the forest.

Late into the night, more wood came and people arrived carrying pots of rice, vegetables, dahl and home cooked breads. After offering the food to the fire, Swamiji began the arati.

The forest was full of literally thousands of people clapping, banging drums, tin cans, and shaking tambourines. Finding a spoon and pot, Swamiji began banging the rhythm of the arati song. Then he found a tin can and played that while dancing with the crowd. Next he found a tambourine and danced around the fire until a voice from within spoke to him.

Wherever he would go, this would happen. The examples are endless, and today his fire continues to burn with the same effortless joy and bliss.