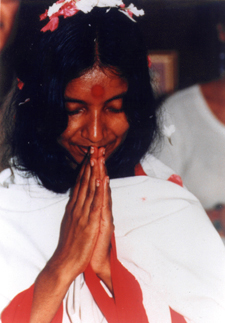 Shree Maa was born into one of the most extraordinary families in India, which included both extremely wealthy businessmen and highly advanced yogis. Her family was descended from Ramprasad Sen, the famous Bengali poet, whose songs are still popular throughout the Northeast of India.

From her earliest years, her only desire was to meditate and to merge her own being into God. Her spiritual radiance was such that as a young child, when local fishermen saw her walking along the beach, they would leap out of their boats with an attitude of great faith and prayer, and would race up the sand to ask this young goddess for her blessings.

Inspired by the 19th century Bengali mystic, Sri Ramakrishna Paramahamsa, Shree Maa left her family’s home for the forests and foothills of Kamakhya, and performed sadhana in the regions of the State of Assam and in the Himalayan foothills in India. She sat most of the time in one asana in the silence of deep meditation, speaking very little. She ate practically nothing, only sandal paste mixed with water, Tulsi leaves, and occasional juice fed to her by disciples and devotees.

Because of her intense tapasya, her body weight reduced to little more than 60 pounds. People who saw her in samadhi for hours and days at a time called her the Goddess of the Mountain, The Goddess of the River, or simply Shree Maa, the Respected Holy Mother.

After several years, she began to roam throughout India, visiting temples, forests, fields, and homes, conducting pujas and archana (offering) to the Divine Mother, and reading from the Chandi Path, one of the most frequently recited scriptures in India describing the Divine Mother Durga’s manifestations on Earth.

During her journey through India, she also began to sing. Sometimes she would sing bhajans all night, and devotees, filled with bhakti, would gather to be in the presence of this holy woman whose voice can melt stone, whose entire life is worship.

In 1980, in a small temple in Bakreswar, West Bengal, Shree Maa met Swami Satyananda Saraswati. Swamiji immediately recognized her as the embodiment of the Goddess he had been actively worshiping for so long.

The two traveled together throughout India, sharing dharma, even when, due to cultural clashes and unrest, their own lives were at risk. It was in the early 1980s that Shree Maa, in communion with her guru, Ramakrishna, was instructed to move to America to share divine love and to teach the meaning of dharma.

In 1984, with no capital and few possessions, Shree Maa and Swamiji left the shores of India for the West Coast of the United States. Shunning self-promotion and publicity, they lived a very simple life dedicated to daily worship, preferring to own little and to offer all to God.

They have established temples to the Divine Mother in every place they have visited around the world. Together, they have undertaken the Sahasra Chandi Yajna at least four times, each a three year fire ceremony and worship of the Goddess, without setting foot outside from the humble temple grounds that they established. The temples have contained numerous beautiful murtis, statues fashioned from clay by Maa and Swami’s own hands, depicting the forms of the Gods and Goddesses described in the Chaṇḍī worship.

Shree Maa has given programs around the world, sharing her songs, stories, and giving loving blessings for all who have attended. She, herself, has been the subject of numerous magazine and newspaper articles and several biographies have been written about her. She is also featured in many other books, as well as TV and radio appearances. Even with all this recognition, she remains as a humble servant to her children, who she blesses with her teachings, her cooking, her art, and her many various talents.

As word of Shree Maa’s presence in the San Francisco Bay area spread, thousands of seekers found their way to the humble grounds of the Devi Mandir. Her realization is an example, an inspiration, a gift. Her bhava comes from pure intuitive experience. Her message transcends all boundaries and religions as she builds bridges across continents, cultures, and creeds.

BE TRUE. Say what you mean and do what you say. If you are true, you will be without fear. If your conscience is clear, your heart will be silent. That is Peace. No matter what the result.

BE SIMPLE. Many words are a burden to the soul. The real message of your heart will be communicated by your actions. The words will only explain the actions. But they must agree, lest we become hypocrites who preach what we ourselves do not practice.

BE FREE. Leave your selfishness behind. The people whose opinions are valued will love us for what we are, not for what we have. The respect which can be bought is as useless as a tree which bears neither flowers nor fruits. When the leaves will fall and the trunk wither, none will come again.

TAKE REFUGE IN GOD. Neither your friends, relations, or others will take you to heaven. Only Wisdom will be our salvation.

CULTIVATE WISDOM. Learn from everyone, everywhere. Then use that knowledge which will bring you into harmony with the universe.

DEVELOP DISCRIMINATION. Pursue only those desires which will make you free. Leave the ones which will get you into trouble. Know the difference and remind yourself daily. Remember that the God you seek resides in every atom. You can offer respect to every atom, even while you maintain your own discipline inside. That you are a spiritual seeker is not something you need to show outside. It will manifest in your behavior, without your having to try. If we are gentle, loving, kind, and honest in our dealings, that is spiritual. Your spirituality cannot be hidden. Similarly, if one is full of fears and trying to hide his inner emotions, such a person is not full of spirit. That is only ego.

LET ALL OUR ACTIONS MANIFEST OUR LOVE. Work is visible love, the expression of love that we can see. People want realization, liberation, to become enlightened. Do not think it is something different from doing for others as you would have them do for you.

SPIRITUALITY IS VERY SIMPLE. I am everywhere, says the sage. I exist in every form of creation. If I hurt any form, I hurt myself. If I raise any form to a higher level, I myself, find progress. It is easy.