After celebrating Diwali in New Delhi, our next destination was Shree Maa’s hometown of Digboi, Assam.

We packed our bags the night before. In the morning, as is our usual discipline, we sat to recite the Chandi.

Since our music stands had been packed, Shree Maa and Swamiji improvised using suitcases to hold up their iPads. As they say, the Chandi must go on! (Well something like that anyway.)

We flew from New Delhi to the Dibrugarh Airport in Assam.

It was a two hour drive from the airport to the hotel where we would be staying.

We all enjoyed the drive through the green and lush tea estates of Assam.

Most of the houses were of a simple rustic construction, while large parts of land were tea plantations and other farms. Cows, goats and other animals could be seen wandering up and down the roads freely.

Along the way, we came across a temple complex dedicated to Manasa Devi, the mother of snakes, to whom Shree Maa performs a Vrat (vow) of worship every year.

We entered inside and were greeted by a local woman. She told us her Guru had founded the temple and since passing on had left it in her care. Along with her family and a few other people she lived there and took care of the temple.

Inside the complex, there were many different altars and temples. The caretaker of the temple was very happy to meet us and was very impressed to find Swamiji spoke fluent Bengali.

She gave us a tour around the property and we marveled to see all the different murtis. Though they didn’t have the Cosmic Altar like our own Devi Mandir, they still had many of the same deities.

There was one altar that looked identical to the cover of our Cosmic Puja Book. There was a murti of Kali, Shiva, Ganesha, Saraswati, Manasa Devi, Mahishasuramardini and there was even a shrine for all the Nava Graha (the nine planets.) In this way the temple was filled with places of worship.

We had brought our lunch with us, and the lady happily invited us in to her home to eat. Their hospitality was impeccable. We were all mutually delighted to meet each other. After a little more conversation, we made our way to the cars to depart. Everyone from the temple complex came to see us off and to bow down and take Shree Maa and Swamiji’s blessings.

Not long after, we arrived at the hotel, where we had stayed during our previous visit to Digboi.

Two years ago was Shree Maa’s first visit to her hometown of Digboi in more than 40 years. After leaving the small town to follow her spiritual mission, she had never returned until our visit two years back. This would be the second time she had returned to her home town.

The hotel owner had fallen in love with Shree Maa and Swamiji during their last visit. He was waiting at the entrance to greet us when we arrived. He was greatly delighted that we had come.

During our stay there, between the Devi Mandir family and Shree Maa’s relatives, the hotel became transformed into an ashram. The sound of Chandi Path, arati or singing could be heard each morning and evening.

After getting set up at the hotel, we went to visit Shree Maa’s ancestral home. One of her uncles had recently built an extension on to part of their property and wanted Shree Maa to come there and bless it. 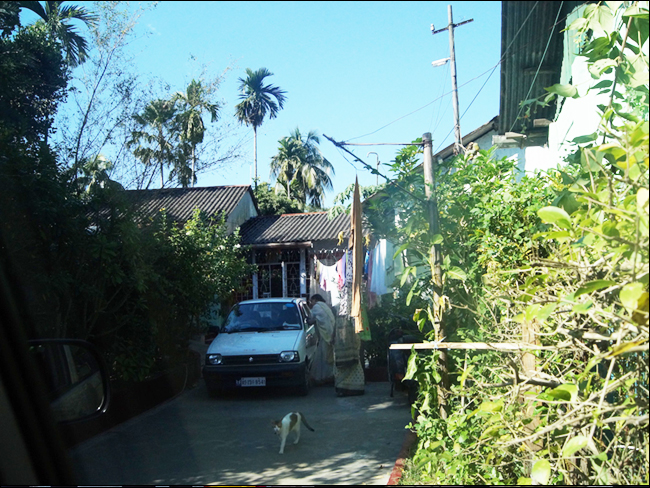 We arrived at the house and saw many of Shree Maa’s relatives present. Shree Maa’s family is spread all around India and many of them used Shree Maa’s return visit as an event for the family to gather together. 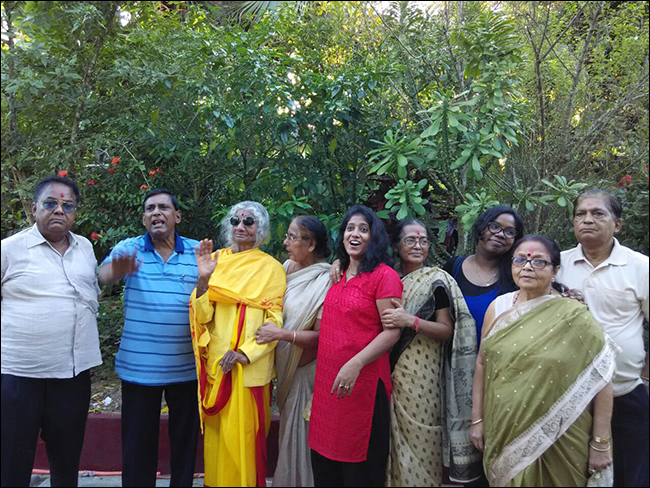 We all sat around on a few cots talking for sometime and then went to see the new extension. We returned early to the hotel since we needed to rest and be ready for the next day. We had a very special program planned, which had been the main catalyst for our journey to Digboi.

When we had last visited Digboi, we had made a surprise appearance at Shree Maa’s childhood school. When Shree Maa came, the principal had come to meet her, and eventually all of the staff and teachers as well.

During our visit they temporarily halted the whole school and let all of the children come out to the courtyard to take Shree Maa and Swamiji’s blessings. The children had all been eagerly peering out the windows of their class room to see who the special guest was, and so were very happy to get the chance to come out and see.

They were so blessed that Shree Maa had come, and they offered us tea, snacks and red and white chauders (which are commonly worn in Assam.) When they gave those chauders, one of the staff members said to Shree Maa, “This is a prestigious gift of Assam, we feel very fortunate that you have come back here after so long, and we feel this might be the only time you come.”

Well, it turns out it wasn’t! Shree Maa’s childhood school was actually our main destination for this visit to Digboi.

The school is a Bengali medium girl’s school, where classes are conducted in Bengali and Assamese, the local language. These days English medium schools have become much more popular, and the support for schools primarily using local languages has diminished greatly all over India.

Shree Maa’s childhood school was similarly facing a lack of funding, and feared having to close in maybe the next three to four years.

Shree Maa had decided to make a donation to help support the school, and for that she had come back to Digboi. She had planned to contribute $10,000, which comes out to more than 600,000 Indian Rupees (Six Lakhs).

Needless to say, for the small local school of Shree Maa’s childhood, it would be a huge amount, empowering the school to not only stay in operation, but also to expand.

In reality, Shree Maa’s offering not only supported the school of her childhood, but would help to preserve the local language, culture, and arts (like classical dancing and singing) things which are often lacking in English medium schools.

It would also help support the education of girls, who often do not get the same educational opportunities as boys, especially in remote parts of India. It was certainly a worthy and respectable cause.

You Too Can Make A Difference –
Contribute NOW to Shree Maa’s School Campaign! 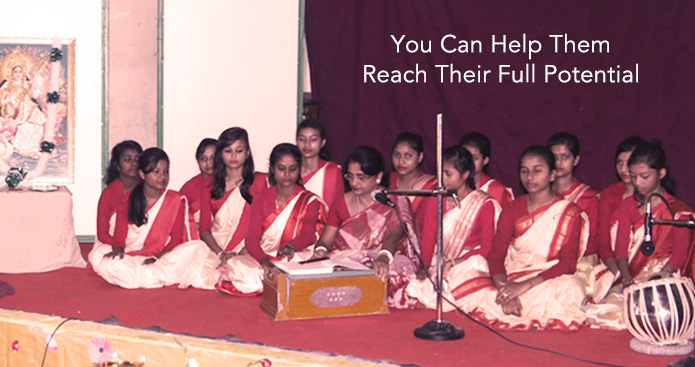 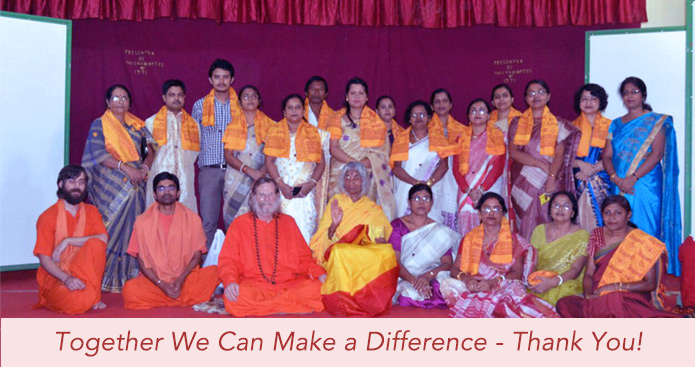 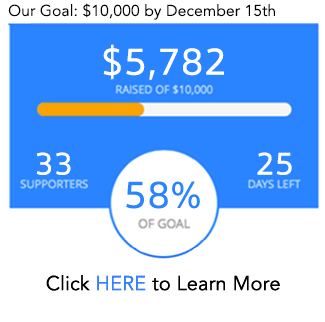 We left from the hotel in the morning after chanting the Chandi and headed to Shree Maa’s school. I didn’t realize as we were traveling there just how much the entire school had prepared for Shree Maa and Swamiji’s visit.

When we arrived, the principal was standing at the main gate to receive us with some of the teachers and staff. From a distance, I could see a few students were also there. The principal’s face lit up brightly as she saw Shree Maa and they both shared a hug.

As I approached further, I was astonished to see all of the students lined up along both sides of the walk way holding their hands in Pranam. Incredible! Yet, that was only the beginning.

They were trying their utmost to express their gratitude to Shree Maa and Swamiji, for both their financial contribution and spiritual presence in their humble school. They led us to their main hall. Upon arriving there, it was clear that they had prepared some special program in Shree Maa and Swamiji’s honor.

Soon all the students, teachers, and staff came and sat in the hall. At the front was a stage and a deep (a light filled with oil or ghee.) They gave an introduction welcoming Shree Maa and Swamiji and then asked them to light the lamp, as symbolically their support was keeping the light of wisdom burning. 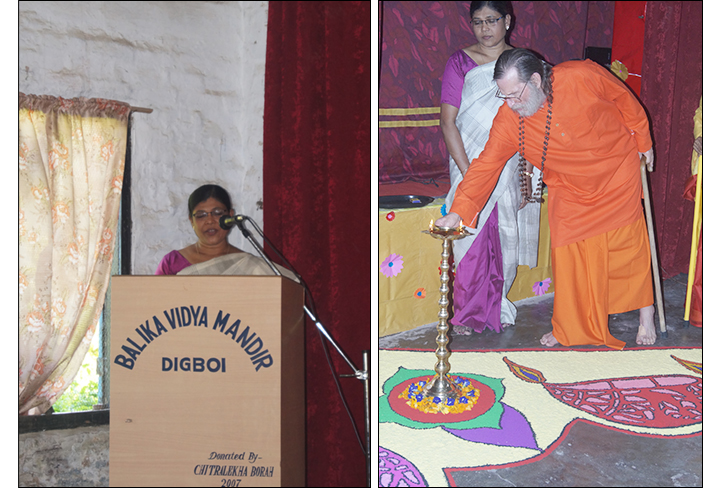 What an incredible program followed after that! There were several performances by students. Watch the slideshow below: 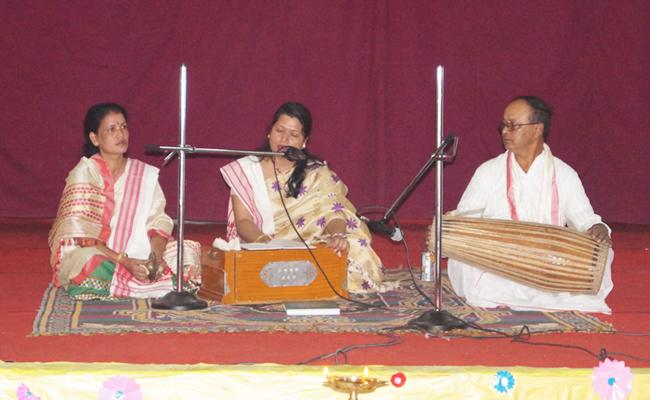 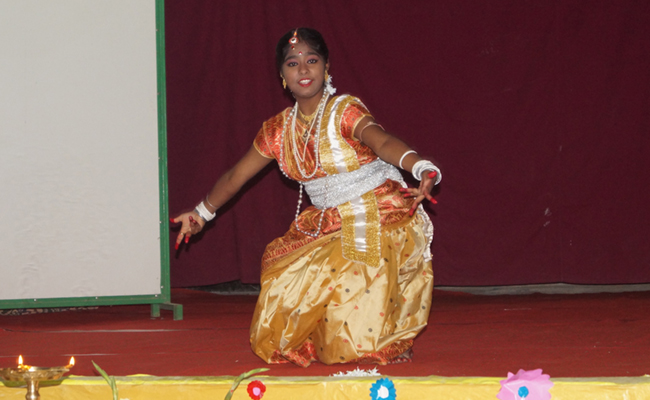 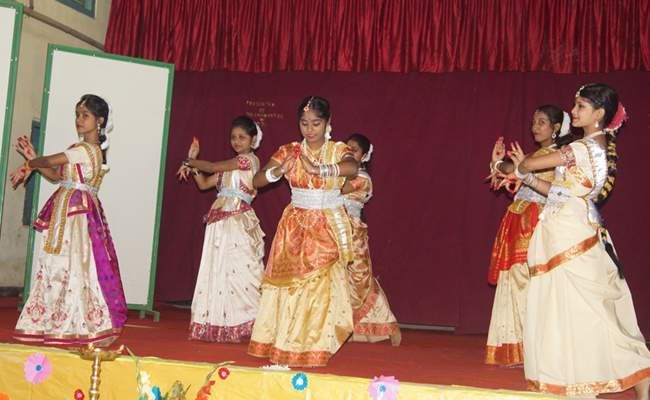 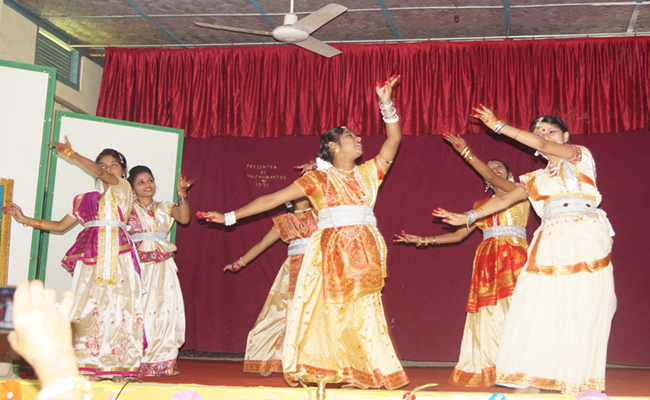 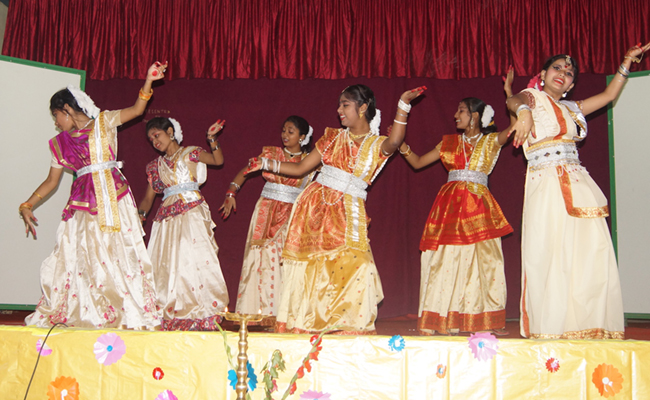 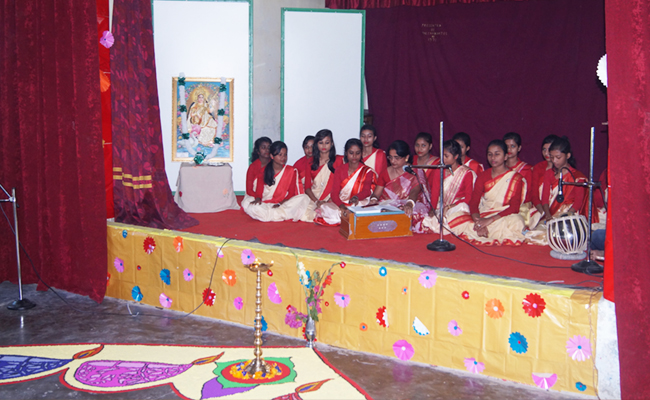 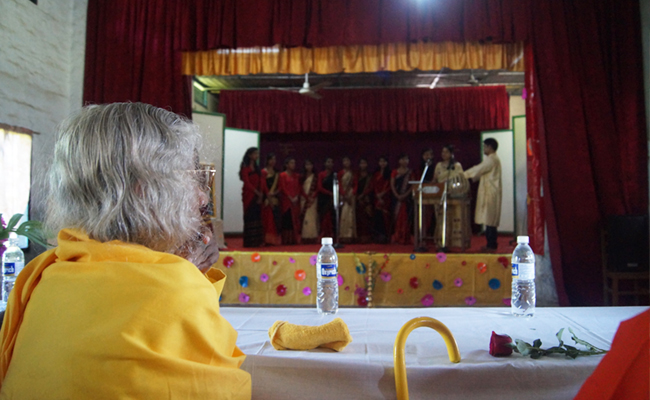 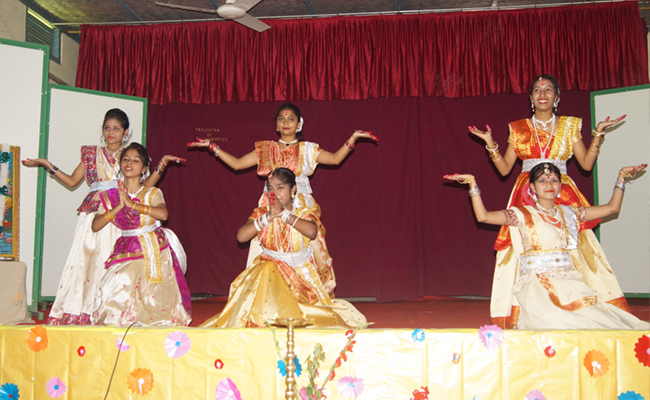 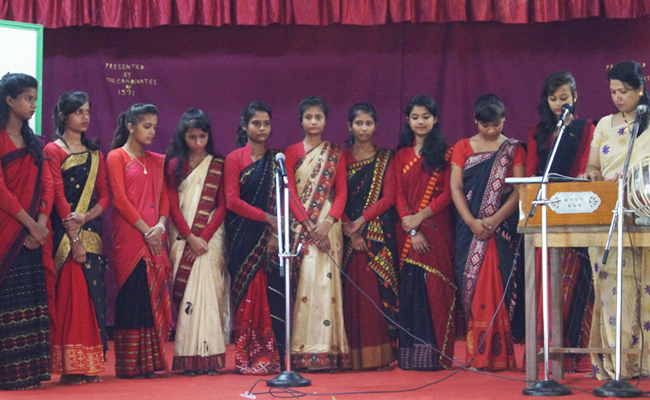 Some performed classical dance and others sang classical Bengali and Assamese songs. There was even interpretive dance.

I later learned that their tabla player was the math teacher! The whole school had come together to put on this program in appreciation of Shree Maa and Swamiji and their offering of support to the school. From the teachers and staff to the students, they all put forward their utmost effort to express their gratitude.

After the first few dances, they paused and asked Shree Maa to address the student body and introduce a little about herself.

Shree Maa deferred to Swamiji, who told the students how Shree Maa had gone from being a young girl studying at this same school to a Guru of an international congregation. He implored them to gain as much knowledge as they could and to move toward what inspired them.

At the request of Swamiji and the staff, Shree Maa also spoke shortly, giving her love and blessings to everyone present. 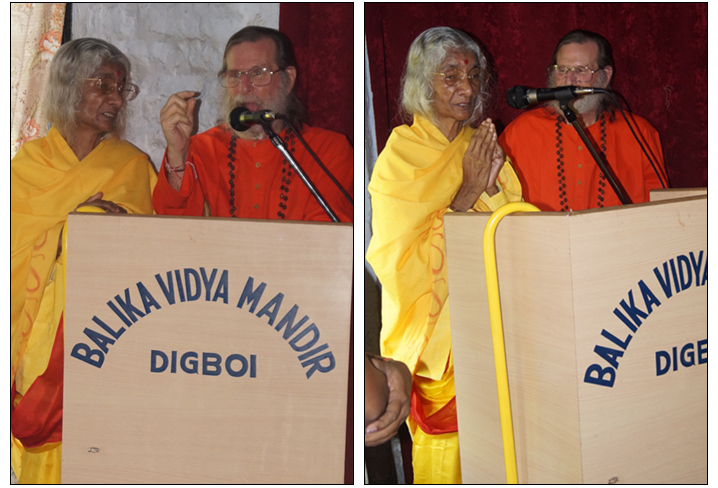 A few more groups of students and teachers gave performances and spoke, then came Shree Maa’s turn. We all took to the stage and Shree Maa led us in singing several songs. Instead of the normal school classes, their whole student body got the opportunity to listen to songs of God from a realized Saint, who had been in the same place they were now. What an unbelievable blessing they all received! 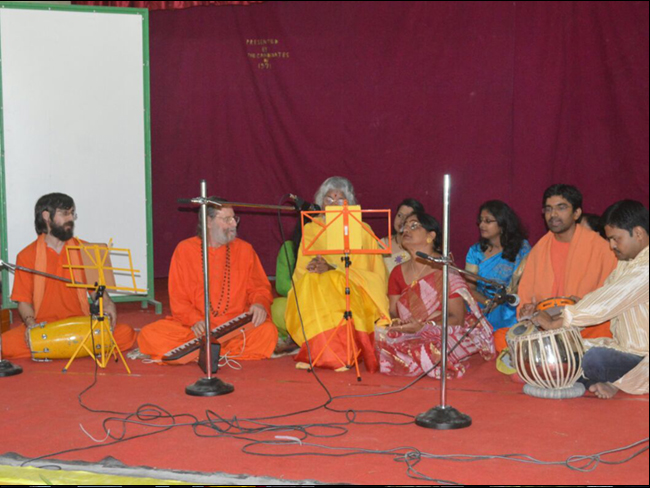 When Shree Maa had finished her songs, she invited the principal to come up to the stage. Shree Maa handed her the check with the donation for the school. The principal was deeply touched. 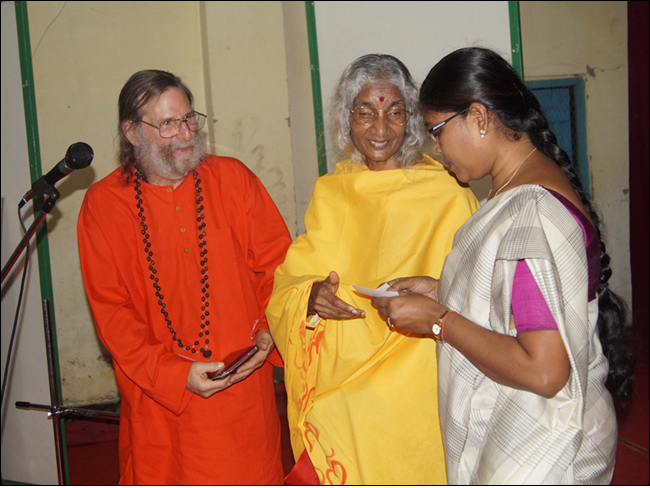 Then Shree Maa invited all the teachers and staff to come up one by one. She gave all of them chauders, rudraksha, prasad and a tilak. 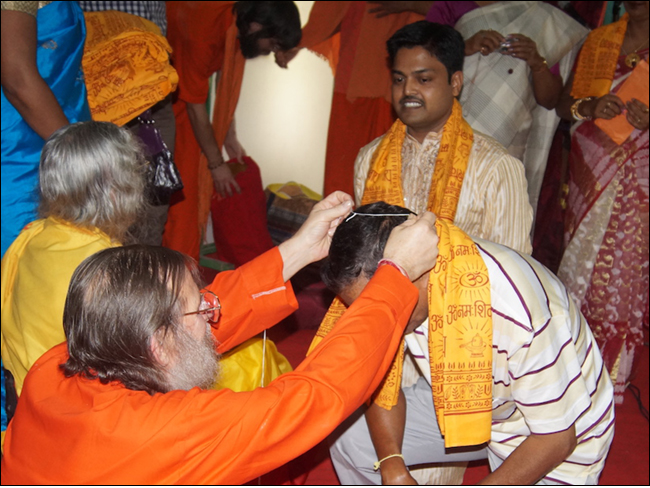 When all the teachers had received their blessing, they called the entire student body to line up and take prasad. Shree Maa had brought some large bags of candy from the US and had plenty to give to everyone. Shree Maa gave the candy while Swamiji gave them each a tilak.

The line of students was quite long, but Shree Maa had brought more than enough for everyone. They came quickly and efficiently through the line and it was finished without much delay. 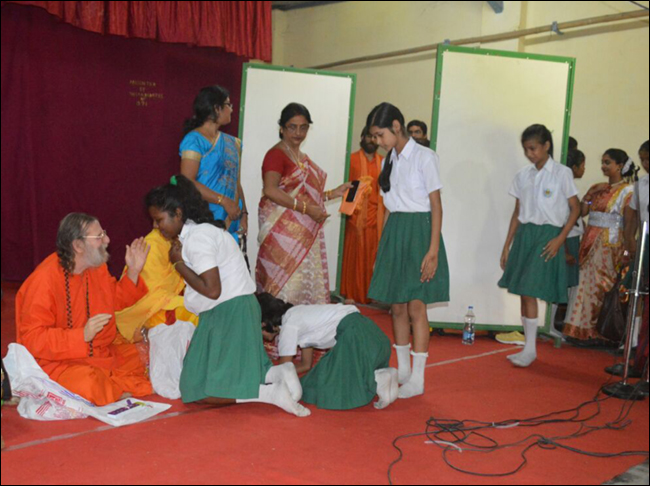 Then the principal of the college in Digboi (which Shree Maa had attended) also came to speak. He was beaming with delight from having seen the program. He expressed what an incredible honor it was for Shree Maa’s childhood school to have her presence and blessings there. How wonderful it was to listen to her singing and to get to hear about the example of her life. He extended his invitation to Shree Maa to also come and bless her former college (where he was the principle), as she had just done for this school. 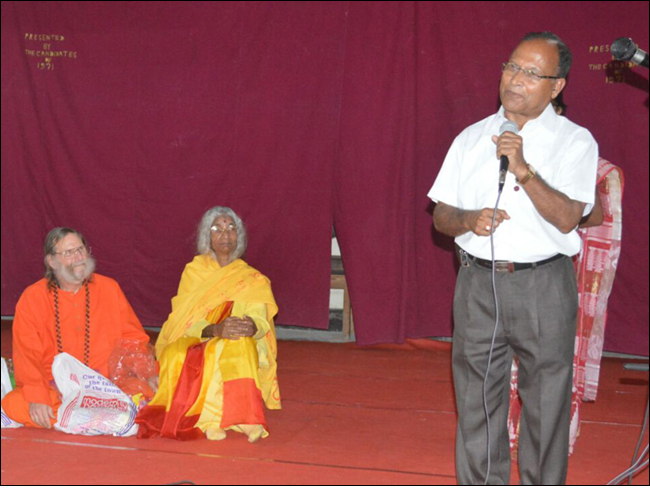 Shree Maa had definitely given the school more than just support financially. She had also given each girl the inspiration that they can become something great even though they come from a small town and humble beginnings.

She gave them all – staff, students and teachers – her blessings, personally, one at a time, even though there were hundreds of students. The magnitude and impact of Shree Maa’s offering was beyond measure.