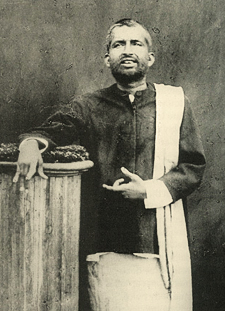 “When righteousness declines and ways of evil conduct increase, I take birth to reestablish the pattern of divinity. For the protection of the virtuous and the destruction of the wicked I am born in every age.” — Bhagavad Gita.

“He who was Rama and He who was Krishna has now been born as Ramakrishna.” — Sri Ramakrishna, two days before his mahasamadhi.

Sri Ramakrishna Paramahamsa is known throughout India, and increasingly in the world, as a purna avatara, a full incarnation of God. Within a hundred years of his birth, The child who was to be generally recognized as a full descent of the Divine into human form, of the same stature as Rama and Krishna of ancient times, took birth in the small Bengali village of Kamarpukur, India, in the year 1836.

When his aging father Khudiram was on a year-long pilgrimage to Gaya to perform the obligatory ceremonies for his ancestors, he had a dream in which he was taken to the temple of Vishnu in the form of Gadadhar (meaning “he who wields a mace”), where a divine voice told him: “I am well pleased with your devotion; I am born again and again to correct the wicked and protect the virtuous. This time I shall be born into your cottage and accept you as my father.”

During the same year, one day his wife Chandra Devi was standing by the Shiva temple near her home, when a mass of light came from the image and entered her body. She fell down unconscious and, when she regained consciousness, she felt that she was pregnant with a child.

The child, also called Gadadhar, later to be known as Sri Ramakrishna Paramahamsa, did not cry at birth as newborn children do. The midwife laid the child beside the hearth for warmth and attended to the mother, and when she returned, she found that the child had rolled into the cool ashes of the hearth and was lying still and silent, covered like Shiva, with the white ashes of renunciation.

Gadadhar grew up in the pastoral village life of Bengal, charming all with his vivacious personality, wisdom beyond his years, precocious mischief, and great repertory of religious songs, which he learned from the wandering minstrels that toured the villages of Bengal in those days. However, he showed no interest in school, beyond learning to read and write.

At the age of 16, Gadadhar joined his brother Ramkumar as a temple priest of Mother Kali in the newly built temple complex at Dakshineshwar. This service he performed until the presence of the Divine Mother became so palpable and continuously real to him, that formal worship dropped away. Thereafter he entered a period of unbroken and unparalleled sadhana.

During the following twelve years he had continuous visions of the Divine in all forms, and untold spiritual experiences. During these years he did not close his eyes in sleep, and only occasionally did he take food.

One after another, spiritual teachers of all religious persuasions were mysteriously drawn to Dakshineshwar, and Ramakrishna threw himself wholeheartedly into the practice each prescribed, usually having the ultimate experience of that tradition within three days time. Invariably, those who came to teach him soon found that they were learning from him, and departed much edified and in reverence of the mystic of Dakshineshwar.

Finally, the Sannyasin Guru, Tota Puri, arrived to guide Sri Ramakrishna to the highest impersonal Reality of the non-dual Advaita Vedanta, and as was usual with him, within three days he entered into nirvikalpa samadhi to the amazement of his teacher, who had himself spent forty years of his life to attain that state.

This twelve year period is unprecedented in all the religious history of mankind. And, at the end of this sadhana, Sri Ramakrishna emerged with the full understanding, born of direct experience, that all of the genuine spiritual paths of all religions if properly followed, lead to the same Divine Reality. 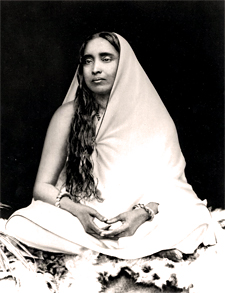 During his twelve year period of “Divine madness,” in a misguided attempt to bring him back to a more orderly state of mind, his family had betrothed him to a young village girl, Sarada Devi. When the cyclone of spiritual experiences abated somewhat, and Sri Ramakrishna emerged as the unparalleled saint, which he had become, and was ready to assume his role as a world teacher, he invited his wife to join him at Dakshineshwar.

When Sarada arrived, he at once recognized in her the living manifestation of the Divine Goddess, and their relationship remained wholly on a spiritual plane. Sri Sarada Devi lived a very quiet and unassuming life, and many of the hundreds of visitors and devotees who soon began to make the pilgrimage to the Saint of Dakshineshwar, did not even know of her existence.

After the passing of Sri Ramakrishna, Sri Sarada Devi, or the Holy Mother as she was now called, came to be more widely known. Soon devotees from around the world began to seek out the saintly wife of the Great Master, and during her long lifetime thousands of devotees came to touch her feet and receive her blessings as the darshan of the Universal Mother.

To truly appreciate the blessing which descended upon humanity in the form of Sri Ramakrishna, one must learn the whole story of his miraculous life, presented in our book,  and video class series Ramakrishna: the Nectar of Eternal Bliss.