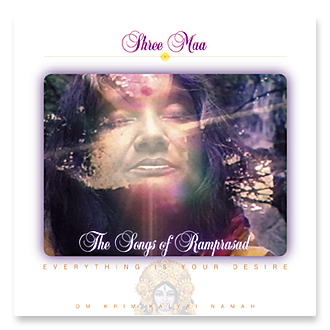 Ramprasad, the great mystic poet of Bengal, composed thousands of songs about the Divine Mother Kali. His songs are a dialogue between the soul and the mind, and explain the essence of spiritual life and the principles of classical Indian Philosophy.The songs of Ramprasad are the most sublime spiritual poetry, filled with the spirit of devotional surrender, expressing a yearning so powerful, and at times so heart-wrenching, that listeners are inspired to renounce all selfish concerns and worldly attachments. His poetry is unyielding in the intensity of its fervor for the dissolution of the ego in the ocean of Divine Love.
Available in Digital Download or Compact Disc

Reviews of The Songs of Ramprasad

Ramprasad’s lyrics are so full of love and combined with Shree Maa’s angelic voice, I couldn’t get enough of it! This CD spent the entire summer in my car stereo. It is beautifully melodious, and the message is so inspiringly divine!

By Kailas
Discovering Ramprasad in translation is like trying to catch a butterfly on a sunny summer day. But listening to Shree Maa sing the Songs of Ramprasad is like becoming a butterfly drifting on the breeze on a warm summer day!