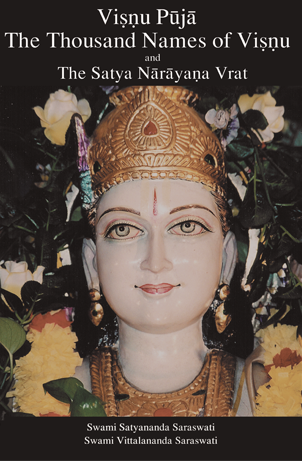 The Thousand Names of Vishnu comes from the Mahabharata, and describes a thousand qualities and attributes of the Supreme Divinity.

“Sat” is truth, “Narayana” is the All Pervading Consciousness. The Satya Narayana Vrat is the vow to speak and act in truth, the most important practice for spiritual seekers this day in age.

The Vishnu Puja is now available with a major update, adding several new systems for worship, as well as many new stotrams, such as Vishnusahasranam, the Thousand Names of Vishnu; Bhishmastavaraja, the King of the Spiritual Songs of Bhishma – the Powerful; Anusmriti, the Remembrance of the Most Subtle; and Gajendra Moksha, the Liberation of the King of Elephants.