Shree Maa and Swamiji were invited to visit Shiva Sailam, a large temple near Mysore in the state of Karnataka, located amidst lush green fields and surrounded on all four sides by a river which is a tributary to Kaveri.

Lord Shiva in the form of Chandramouleshwara and Divine Mother Kamakshi are worshipped daily. There is also a beautiful Sri Ramakrishna murti housed in a special temple where Shree Maa sang Kandana Bhava and other songs in praise of Sri Ramakrishna. 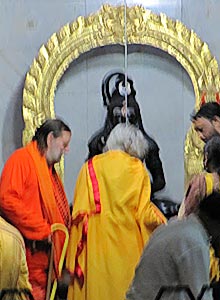