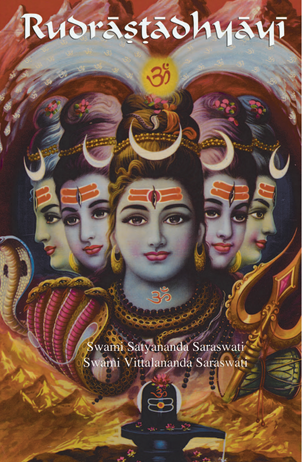 The Rudrashtadhyayi contains eight chapters that emanate from the Shukla Yajur Veda, which are especially beloved to Lord Shiva.

The 1st chapter requests Lord Shiva to bless us with His firm determination. The 2nd chapter contains the famous “Purusha Shukta” in praise of the Supreme Being. The 3rd chapter worships Shiva in the form of the spiritual warrior Indra, the Rule of the Pure. Chapter 4 worships Shiva as Surya, the Light of Wisdom. Chapter 5 is well known as the Namakam, where we bow to the many manifestations of Lord Shiva. Chapter 6 we ask Shiva for blessings, chapter 7 we make offerings to his various manifestations. The 8th chapter is famous as the Chamakam describing the divine characteristics of Shiva that are within us. The final chapter asks for peace and offers peace.

Presented in the Sanskrit, Roman phonetic and complete English translation. The Rudrashtadhyayi has been chanted for thousands of years, by millions of devotees. The feeling and wisdom of these beautiful hymns of praise have been transmitted from generation to generation in the oral tradition of Guru Disciple relationship. Those who chant the Rudrashtadhyayi can feel the vibrations of the many generations of sincere worshippers and can receive this transmission themselves.