“Hanuman means a monkey; not just any monkey, but the divine example of pure devotion. 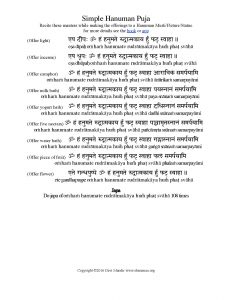 Mind is like a monkey. It jumps and dances skips and hops, and chatters incessantly.

It rushes forth to obtain all desires and changes those desires with the fickleness of a primate swinging from limb to limb.

Even the greatest meditators must agree with Arjuna in the Bhagavad Gita, who said, “To silence, the mind seems to be more difficult than to master the mighty winds.

If we can not stop the monkey mind, then at least we can tune to the vision of the divine monkey.

His dance is always graceful, his jumping an act of service, and his thoughts of devotion are always so soothing.

Divine Monkey of the Ramayana

Sri Hanuman is the greatest devotee and the purest example of selfless service found in the Hindu holy books. His friendship and service to Lord Rama are remembered and revered in the great Indian epic, the Ramayana.

When Lord Shiva (Shiva Puja book) saw that Vishnu had taken birth upon the earth as Lord Rama, He desired to participate in the drama which was to unfold.

Therefore, as the eleventh incarnation of Rudra, literally asru-trayate, He who takes away the tears, He manifested as Hanuman, in which form he could act as the perfect servant of the Lord.

And the story unfolds: Lord Rama meets Hanuman deep in the forest while searching for his wife, Sita, who was kidnapped by the demon-king Ravana (the great Ego).

Hanuman recognizes Rama as his Guru, and when Rama tells Hanuman of his plight, Hanuman immediately joins His service and goes in search of Sita.

Saying the name of Rama with full faith, Hanuman leaps across the ocean to Ravana’s kingdom of Lanka. Upon entering Lanka, Hanuman fights with and conquers many demon warriors, and ultimately finds Sita sitting alone in a garden remembering Her Lord.

After delivering Rama’s message of impending rescue to Sita, Hanuman allows Himself to be captured and taken to Ravana’s court, where His tail is set on fire.

Hanuman uses the flames to set the city of Lanka ablaze, before jumping back across the ocean to the holy feet of His Lord, Sri Rama.

These events are described in the Sundar Kanda, the “Beautiful Chapter” of the Ramayana.

By performing Hanuman’s puja, worship of the servant of the Lord, we train our monkey mind to become a divine monkey.

We re-channel our self-serving interests to become selfless servants and teach our consciousness to view the movie of the divine Lila, the drama of everyday attitudes and occurrences, with similar conviction and strength as to what Hanuman demonstrated in all His endeavors.

When we embody His spirit in our own lives, we perform pure karma.

Without a doubt, worship of Hanuman inspires devotion, the purest conviction, and the highest motivation in every devotee’s path to Self-Realization.

Hanuman Puja is conducted every Saturday at the Devi Mandir.

In the evening, following the puja, there is beautiful kirtan, and Shree Maa anoints the forehead of every devotee with sacred sindur powder (red vermillion) from the puja.

She whispers to each devotee, “Lord Hanuman bless you with pure devotion.”