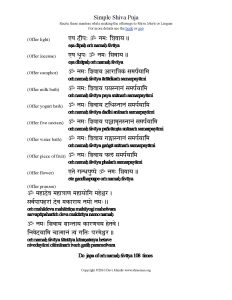 Lord Shiva is the great Transformer who transitions us from the darkness of ignorance to the light of divinity. He helps us to move beyond our attachments so that we may discover the eternal Consciousness that shines behind our perceptions.

Regardless of age, country, or circumstances in life, we can be sure of one thing — our lives will change. Each moment differs from the preceding moment and is distinct from the instant that follows.

Sometimes we experience great joy in this change, as we watch a bud blossom into a beautiful flower. Yet other times we feel deep sorrow; our flower withers away to nothing. This life is a pendulum that moves us from joy to sorrow again and again.

We might wonder: is there no way to stop this pendulum? Lord Shiva is the One Consciousness who perceives all transformation.

He is called The Great Destroyer because by transforming our reality each moment, He destroys what was — to create what is. When we are attached to our current circumstances in life, and when Lord Shiva dutifully changes them, we feel sorrow.

In the spiritual life, He creates change for us in order to illuminate our attachments and help us go beyond them. In this way, we can let go, and find the eternal Consciousness that shines behind the apparent transformations of our perception.

Shiva means “auspiciousness” and He represents the Consciousness of Infinite Goodness. Lord Shiva is known by several other names, including “Shankar,” “Mahesh,” “Bholenath,” “Neelakanth,” “Mahadev,” “Mahadeva,” “Nataraj,” and others.

Lord Shiva, as the Lord of Yoga, is considered the highest Guru by the “Sannyasins” who have renounced the world to attain the Absolute. Swamiji teaches us an excellent description of the meaning of “Shiva.” He translates a Sanskrit verse as follows: The letter “SHA” is the illumination of Peace, the syllable “I” is the Causal Body, “VA” means union with the infinite, and the definition of “Shiva” is the welfare of all objects of perception.

Swamiji says to understand Lord Shiva, we should begin by conceiving in our mind the ultimate goodness.

When we have a picture of this perfect goodness, infinite goodness, then we make it even better… and that is the beginning of the understanding of Shiva.

Lord Shiva is the Lord of Sankalpa, the strength of willpower to define and obtain our goals. 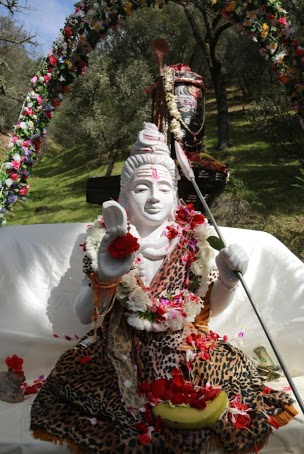 He gives us the strength to attach ourselves to the sustaining values of life, to the values that will stay with us through eternity, the eternal ideals of perfection (Dharma).

By worshiping Shiva, the Consciousness of Infinite Goodness, we cultivate his qualities of freedom from attachment and freedom from bondage to this world of objects and relationships.

We cultivate the attitude of perceiving the Intrinsic Reality, not the extrinsic appearance. We identify with that which does not change and become the witness of the changes of nature.

From this perception, we act and interact with the world remembering the eternal reality. We free ourselves from pain and fear, and see them as passing states of mind, accepting the will of God.

Worship at the Devi Mandir

The greatest celebration for Lord Shiva is at the end of the Lunar month of Magh (usually in January or February) on the night of Maha Shivaratri. Lord Shiva is worshiped throughout the night with milk, yogurt, ghee, and honey. The worship begins at five in the evening and goes on past dawn, the next day. 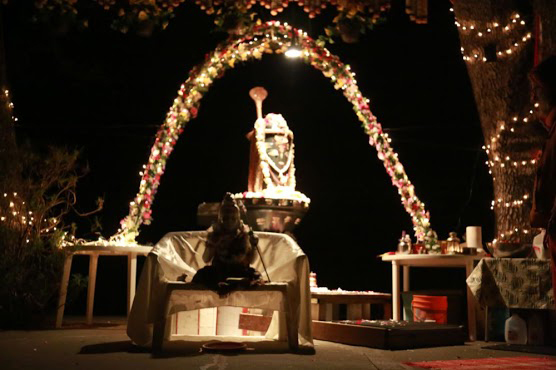 Words cannot describe the thrill and devotion of worshiping Lord Shiva on Maha Shivaratri in the sacred grounds of the Devi Mandir. Shree Maa’s devotion to Lord Shiva, Swamiji’s tapasya, the ardent chanting of mantras, and the presence of devotees from all over the world, make the Temple come alive with the presence of Mahadeva (The God of all the Gods).

Throughout the night Puja is conducted at each of the three Shiva Lingams, and there is a homa with chanting of “Om Namah Shivaya” and recitation of scriptures dear to Lord Shiva. This celebration is accompanied by lots of devotional singing and dancing. Different kinds of holy Prasad are offered to Lord Shiva in worship.

“Pu” means merit, and “JA” means to give birth. Therefore, Puja is that which gives birth to merit. In our tradition, the highest merit is the privilege to sit in the presence of God. Puja is an ancient system of worship designed to guide the mind to this experience.

The perfect place to begin your practice of Shiva worship is with the Beginners’ Shiva Puja.

In this book, Swami Satyananda Saraswati makes a profound spiritual technique easy and enjoyable to learn!

This book contains all the elements for a proper puja, including Shiva’s meditation, mantras for the articles of worship, His one hundred and eight names, arati, and the Shiva Calisa.

For more advanced practices, the Shiva Puja and Advanced Yajna book is recommended. By performing Shiva Puja and Yajna, we sacrifice egoistic tendencies into the fire of Divine union and come to experience the bliss of Pure Consciousness.

This book contains a beginner’s Shiva Puja, intermediate Shiva Puja, and advanced Shiva Puja. Also, the one thousand names of Shiva, and a complete system for a Vedic fire yajna, or sacrifice, are included.

In addition, the system of worship for the sacred fire ceremony and an appendix of additional mantras and strotras are included.

With all the material contained in this book, the Shiva Puja and Advanced Yagna, it is possible to spend decades studying and refining the worship of our beloved Lord Shiva.

An enjoyable way to learn the Shiva Puja is by watching Swamiji’s Shiva Puja Video Class. This video series covers the Beginners, Intermediate, and Advanced Puja. It also gives the complete system for Yajna or fire sacrifice. Yajna is the union between the fire burning in the Ajna chakra, the light of meditation, and the howan Kunda, the sacrificial altar. 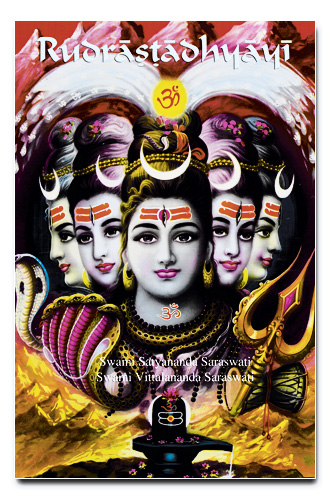 Get Your Copy: Rudrashtadhyayi Book

The Rudrashtadhyayi is the most acclaimed and celebrated hymn to Lord Shiva and is chanted continually at all the Jyotir Lingams. Om Namah Shivaya!

Rudrashtadhyayi celebrates Shiva, The Consciousness of Infinite Goodness, in his form as Rudra, the Reliever of Sufferings.

The Vedic poems of the Rudrashtadhyayi convey the spiritual emotion, or bhava, of the passionate love and worship of Shiva. Chanting them helps remove our suffering and grants us spiritual peace.

The feeling and wisdom of these beautiful hymns of praise have been transmitted from generation to generation in the oral tradition of the Guru-Disciple relationship.

Those who chant the Rudrashtadhyayi can feel the vibrations of the many generations of sincere worshipers and can receive this transmission themselves.

The Rudrashtadhyayi consists of eight chapters. The First Chapter requests Lord Shiva to bless us with His firm determination.

The Second Chapter contains the famous “Purusha Shukta” in praise of the Supreme Being. The Third Chapter worships Shiva in the form of the spiritual warrior Indra, the Rule of the Pure. 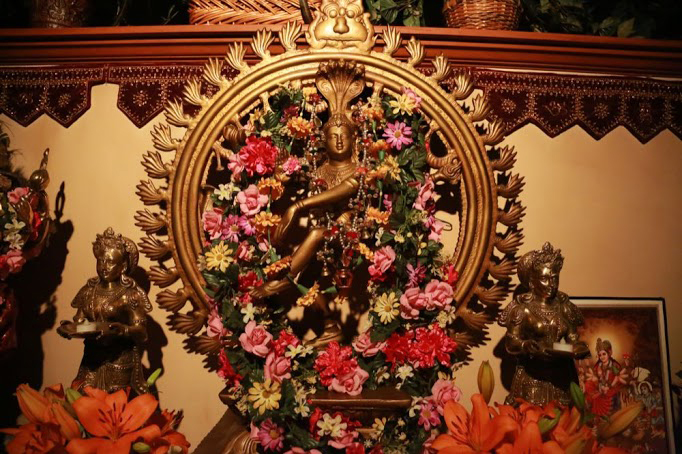 Chapter Four worships Shiva as Surya, the Light of Wisdom, and Chapter Five is well known as the Namakam, where we bow to the many manifestations of Lord Shiva.

In Chapter Six we ask Shiva for blessings, and in Chapter Seven, we make offerings to his various manifestations.

The Eighth Chapter is famous as the Chamakam, which describes the divine characteristics of Shiva that are within us. The final chapter, Chapter Nine, asks for peace and offers peace!

Swamiji has taught an inspiring class on the Rudrashtadhyayi, which has been captured on video in the Rudrashtadhyayi Video Series. The knowledge shared in this video class grants us the wisdom to move into an intuitive understanding of the Sanskrit mantras. It gives a clear grasp of the yoga system and yogic knowledge needed to incorporate this scripture into a personal spiritual discipline.

Join us every day on live webcam for Shree Maa’s puja to Lord Shiva. In addition, every Sunday, Swamiji chants the Rudrashtadhyayi. Both begin early in the morning, typically starting from 6:30 -7:30 am PST.

Worship the Lord called the “Consciousness of Infinite Goodness,” who is the Source of all truth (Satyam), pure consciousness (Shivam), and beauty (Sundaram)!