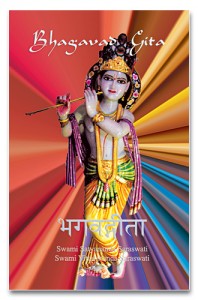 The Ideal of Perfection is constantly evolving. It changes form according to every circumstance.

The Bhagavad Gita conveys the greatest blessings in understanding the Ideal of Perfection and gives us the inspiration to reach for it.

Swamiji’s class focuses on the inner struggle of the spiritual aspirant to follow their own chosen ideal of perfection in every moment. There is no other circumstance in which divine knowledge is more appropriate.

Get your copy of the Bhagavad Gita, which is also available as an iPad App, and tune in to Swamiji’s class on the webcam at 6:00pm every weekday!

This video concludes the discussion of Chapter One, Arjun’s dilemma. After observing the battlefield, Arjun, the Clarity of Devotion is dejected and doesn’t know what to do. Swamiji’s illuminating discussion highlights the importance of following one’s own highest ideal of perfection.

Chapter Two begins the dialog between Krishna and Arjuna which led to Krishna’s dissemination of the divine teachings. The battlefield is set, the forces of good are opposing the forces of evil, and Arjuna and Krishna are in the chariot in the middle of the battlefield. Krishna responds to Arjuna’s despondency and doubts. Listen in….

In Chapter Three of the Bhagavad Gita, Krishna tells Arjuna about action and wisdom. Krishna says that efficient action comes from action through sacrifice. He also explains to Arjuna the importance of following one’s own highest ideal, and not trying to follow the ideal of anyone else. Swamiji clearly explains the passages of this chapter and answers questions at the end.

Chapter Four is about performing action with wisdom. Lord Krishna says, “All actions, without exception, culminate in wisdom.” Whether we act with knowledge or with ignorance, wisdom will surely be the result. This wisdom leads us to the highest peace. Swamiji’s discourse encourages us to give our best in every circumstance and to unite in wisdom with every action.

In Chapter Five, Arjuna asks Lord Krishna about the meaning of renunciation and union through action. Lord Krishna explains that both paths lead to the same result. In the last half of the class, during question and answers, Swamiji invites Swami Ram Kripaluji to elaborate upon the meaning of this chapter and to offer answers to questions from devotees.

This chapter explains how renunciation leads to union with the soul. By means of renunciation, the senses are controlled, the mind is controlled, and the soul remains fixed in the delight of knowledge and wisdom. In the second half of the class, Swami Ram Kripaluji and Swami Satyananda offer their illuminated answers to questions posed by devotees.

Chapter Seven teaches us how to apply wisdom. Lord Krishna explains to Arjuna the nature of God and the various attitudes with which God is propitiated. In the last half of class Swamiji answers questions, and Swami Ram Kripaluji offers a song in the form of an answer.

In Chapter Eight, Lord Krishna explains to Arjuna how to control the senses. He also describes the auspicious times to leave the body. At the end of the chapter, Swamiji answers questions and cuts asunder the doubts and confusions born from the misunderstanding with His sword of wisdom.

In Chapter Nine, Lord Krishna reveals a supreme secret which Swamiji summarizes as “All you need is LOVE”! Lord Krishna explains to Arjuna that “I reside within all of creation in the form of the unmanifest.” He also explains how He directs creation and bestows instructions to Arjuna on how to offer his devotion with the greatest sincerity and efficiency.

In Chapter 10, Lord Krishna, through his infinite compassion and love for His disciple Arjuna, describes His true nature. Lord Krishna explains that He is the infinite, before beginning and without end. Among all of the things of creation, Lord Krishna is the Supreme. In the Q&A section of the class, Swamiji tells a story which highlights the difference between wisdom and devotion.

Chapter Eleven is the famous chapter in which Lord Krishna reveals his Universal Form to Arjuna. To receive such a darshan is extremely rare; even the Gods long to receive such a vision of the Infinite Supreme Divinity. Swamiji shares his wisdom with the class and tells a story about Socrates.

In Chapter Twelve, Lord Krishna explains to Arjuna how we earn the Love of God. He teaches that we can get closer to God through renunciation, meditation, wisdom, and action. Swamiji explains that every action we perform must be done with passionate detachment and sattwic devotion.

“They speak of a banyan tree, with its roots above. Its leaves are the indestructible meters of Sanskrit.” Lord Krishna instructs Arjuna to cut this tree down with the weapon of non-attachment. This beautifully poetic chapter teaches us to remain unattached to the perishable qualities of nature, and to seek refuge in that Perfect Consciousness from which the activities of evolution originally streamed forth.

In this chapter, Lord Krishna first lists the qualities of a divine individual, then the qualities attributed to the forces of individuality. Divine qualities give rise to liberation, while individuality besets the individual with bondage to worldliness. Swamiji reminds the class to be judicious about whom we associate with, stating that “there is a probability that you will become just like those with whom you associate.”

In Chapter Seventeen, Lord Krishna explains that our faith is a reflection of the three aspects of nature (gunas). If our faith is expressed as sincerity, devotion, selflessness, and loyalty, even if we don’t know the scriptures, our worship is sattvic. One who worships for wealth is rajisic, while one who worships to harm others is tamasic. Lord Krishna explains that man consists of his faith – we are what we believe in! In this class, Shree Maa offers Her definition of the contemplation of faith.

In Chapter 18, Arjuna asks Lord Krishna to explain the primary principles and distinctions of a Sannyasi, or one who has established the truth within. Sri Krishna tells Arjuna that when we establish within our own selves all actions that have external desires – then that is establishing the truth within. And, when we release our attachment to the fruits of those actions, this is renunciation. Sannyasis perform three types of action: yajna (actions that bring one into union), dana (giving as much as is appropriate), and tapas (austerities). Lord Krishna then explains the three different qualities of action and the five causes by which we can attain the end of all action.

In the last half of Chapter 18, Lord Krishna inspires Arjuna to get up and take action on the field of battle. He instructs Arjuna to “establish your consciousness in Me during all actions. Unite in My supreme intelligence. Always take refuge in the consciousness of Me!” Lord Krishna declares to Arjuna that “…in truth, you will come to Me. This is My promise to you, for you are My beloved.”

This final class is a question and answer session with Swamiji regarding the teachings of the Bhagavad Gita. Swamiji discusses what it means to serve silence and how to react from the heart. Other topics include: free will and karma; scriptures and faith; confusion and depression; and the qualities of sattva.