Reading about the lives of saints and sages, we learn about the exalted states they reached through their devotion and wisdom.

Their paths may have been many, and indeed, the saints themselves were very different in their mental and emotional make-up.

From the barely educated Ramakrishna, to the highly sophisticated Vivekananda, the highway robber Ratnakar (who transformed into Maharishi Valmiki), to the spiritual prodigy Jnaneshwar, the deeply devoted Meerabai, to the highly intellectual Shankara, from householders to dispassionate renunciates, they are a varied group of people, but shared one common trait: their intense and all-consuming love for God.

They are said to have experienced the highest realization, known variously as enlightenment, (the ultimate truth, nirvana, “neti neti,”) words attempting to describe that state where they knew, with absolute conviction, that they too were embodiments of God.

What is this state called enlightenment? Can a master spontaneously transmit this state to his disciple? So many new age gurus promise a Shaktipat, and pranayama techniques where the recipients purportedly reach Samadhi, and other blissful states. Are these for real or can they be dangerous? We talked to Swamiji to find out the real deal.

What does a spiritually enlightened state mean?

Enlightenment is one of those terms that mean different things to different people. There is no one definition. Everyone has their own idea.

I don’t think you hear me use that word very often. It is not part of my spiritual lexicon. I talk more about illumination, because enlightenment implies a permanent illumination, and I don’t believe that exists, except in the hopes and dreams of devotees.

I know Shiva was attracted to Mohini, Vishnu had a relationship with Vrinda, Brahma chased Saraswati; and they are the Best of the Gods!

They are beyond enlightenment! They are completely divine; not part-timers like us mere mortals.

Jesus had his doubts; Ramakrishna and Sarada Devi had their moments; even Gautam Buddha, etc., all had great illuminations, and then also times of despair.

Illumination can be described from several viewpoints or perspectives. For our purposes, the illumination I am speaking of is from the perspective of manifested existence.

Is this illumination temporary, transitory, because it comes and goes based on the state of the mind?

When the mind is silent, the veil of illusion can be lifted.

When the mind is turbulent or desirous, the veil has been lowered, dimming illumination.

The concept of enlightenment is that the illumination is there permanently, and that it does not go out. I believe that it does go out (get veiled, dimmed) based on the fancies of the mind. If it can go out for Brahma, Vishnu or Shiva, it can surely go out for any of us!

Thinking further, if there were a permanent state of Enlightenment, then how can we explain the existence of creation? It is my view that enlightenment is a state that devotees ascribe to their Gurus in the hope that they, too, can become liberated from all they don’t like.

Whether the Guru is actually permanently in that state of liberation or not, and whether it is sometimes or all of the time, are mere aspirations and projections from the devotees.

So let’s leave all the talk about enlightenment for people in the kitchen, and we will talk about sadhana.

Is Sadhana the only way to get illuminated?

Absolutely, the only way. You have to do something, and the practice of sadhana has many, many paths or procedures, which can appeal to all kinds of different personalities. I encourage you to read and study the article Paths to Self Realization, which explains a variety of paths and their associated steps.

Many devotees are curious about Enlightenment, and they view it as an “end state” and yearn for mental concepts to explain what it actually is. But in reality, there is no end state – expansion and consciousness are infinite — and it is not a mental concept, as it is beyond the mind.

So, rather than focusing on Enlightenment, it is best to stay in the present moment and enjoy the journey. The journey I refer to is your individual Path to Self Realization. I have showed you several paths, now it is time for you to practice and experience this for yourself.

Once you have the experience, you will realize that trying to describe something that is so blissfully indescribable, will not be helpful to anyone. What can be helpful to others, however, is describing the path you took, the method you used, and inspiring others on their journey. This alone is what I am trying to show you.

My simple advice is: with a calm, serene mind, focus your efforts in one-pointed Sadhana, and through your Sadhana, move beyond curiosity into a direct experience of illumination yourselves.

This will be my highest attainment and my greatest joy!

Swamiji, can you help me understand what is meant by illumination? How long does it last?

We can describe this illumination as “moments of enlightenment,” as it is a temporary state which occurs when the mind is silenced. So, for the moments we are illuminated, we are a source of light, wisdom, love, peace, joy, and inspiration to the world.

The fruit of this illumination is expressed through all of the divine qualities, including patience, gentleness, and self control.

This is what we should strive for — the Divine Expression of Illumination. You have all experienced moments of joy, gentleness, and love. Become aware of those moments, and many of your questions will be answered!

It can be. The experience of samadhi most often results in an illumination.

But we can become illuminated in love, in wisdom, and in devotion, without going into samadhi. Keep in mind, though, the ultimate value of any spiritual experience is the change that it inspires in our lives.

What does illumination feel like? Is it possible to describe it?

This must be different for every individual, and for every experience.

What does one become illuminated in? 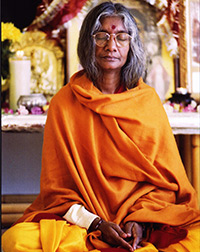 Is it in love, in wisdom, or in devotion? That will determine the quality and character of that illumination. Most often when illumination takes place, all three are present.

It is so difficult to put in words the experience of illumination. I can say that it feels very pure, divine, filled with energy and light, totally secure, yet expansive.

But as many are the people that you ask, so many will be the responses you receive. That is why the rishis said, “Neti neti,” not this, not that. There is no one way to describe it.

All we can describe is what we did to reach that experience, which gets back to my earlier recommendation of focusing on Sadhana.

How do we best utilize spiritual experiences to make a positive change in our life? Why is it that we sometimes see spiritual people fall from the path of dharma?

It is true that we hear of many scandalous stories about fallen saints and sadhus. They may have inspired many people, but then became endowed with selfishness and began to enjoy their material success. It is too easy to fall and begin to believe your own rhetoric.

Our objective is to translate spiritual experiences into a change in our own lives and become an inspiration for others. We want to use our hands for the good of society and make these changes permanent, never to return to worldly designs.

The safest expression of divinity is the humility of a child. Remain with childlike humility, and remember that everything granted to you is through Her grace.