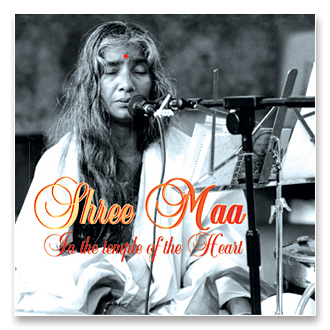 “In the Temple of the Heart” contains rich songs and stotrams that are tender and loving. Every song that Shree Maa sings emanates from the temple of Her heart. This collection of songs invites the heart of the listener to melt into the joy of God’s love.
Available in Digital Download or Compact Disc

Reviews of “In the Temple of the Heart”

I love this disc. It has some very well know stotrams that are executed with so much grace. I am rarely brought to tears over recordings, but the renditions of these songs melt my heart, and they never get old, no matter how many times I listen. Shree Maa, your voice is precious…truly rare indeed.