Foreign Devotees Sing a Beautiful Recitation of the Sundar Kanda

After performing worship, they all assembled in one area of the temple. Then as one voice, they all sang the Sundar Kanda with great rhythm and speed. Seeing so many foreigners reciting with so much devotion, the local people who came to the temple for evening prayers were greatly surprised.

Playing harmonium was Trilochan, on tablas was Rajan, on dholak Vinay Bhushan, playing the cymbals was the Respected Ramya, and on the bells was Srini Baba. After completing the recitation, they joined the arati in the Ram Mandir and in the Sankat Mochan Hanuman Mandir. The foreign devotees distributed prasad with their own hands. Coming from many various countries were Dharmesh, Mahananda, Manohar, Srimati Rukmani, Susri Parvati, Kamala, Nanda and others joined devotees Amitabh and Jolly Agrawal to perform the recitation. 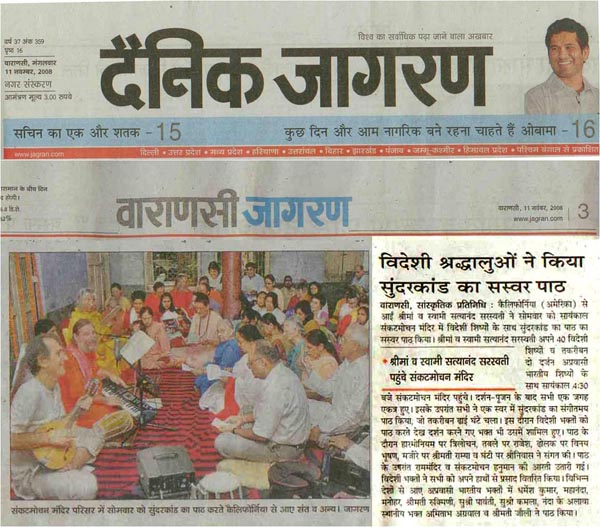