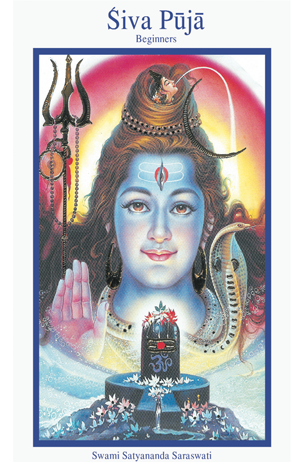 The perfect place to begin your practice of yogic worship. Lord Shiva is the Consciousness of Infinite Goodness, and his five letter mantra makes His puja an excellent starting point for first time Sanskrit chanters.

Pu means merit and ja means to give birth. Puja is that which gives birth to merit, and in our tradition the highest merit is the privilege to sit in the presence of God. Puja is an ancient system of worship designed to guide the mind to this experience.

This book contains all the elements for a proper puja, including Shiva’s meditation, mantras for the articles of worship, His one hundred and eight names, arati, and the Shiva Calisa. All mantras are presented with the original Sanskrit, Roman transliteration, and English translation. Also included is a guide to Sanskrit pronunciation.

Even though this book contains a Shiva puja for beginners, it may seem a bit daunting at first. The book contains the Sanskrit text plus transliteration plus English text of a basic puja (ritual worship) of Shiva or, as Swami Satyananda aptly translates this name, the Consciousness of Infinite Goodness, and if you are a newcomer to this type of ritual, you will have a lot of questions about the how’s and what’s and where’s of the process. Don’t let this scare you off if you are serious about learning puja, however!!Fortunately, one of Shree Maa’s and Swami Satyananda’s devotees has compiled a file with questions and answers concerning this Shiva beginner’s puja (see shreemaa.org newsgroup). With this additional information, you will find in this book all you need to know and more. Apart from the mantras with which you make the traditional offerings, there are the 108 names of Shiva, a song for arati and, as an additional bonus, the Shiva chalisa, a song which is a goldmine for those who want to learn more about Shiva’s activities and characteristics. Swami Satyananda’s translation is very special, because it takes you beyond the conventional way of looking at ritual texts of great antiquity. Divinities are not ‘out there’, but aspects of your own consciousness and puja becomes an inner experience as well as an outer ritual. It does take some work, but the book will teach you how to do puja. Don’t miss it if that is what you really want, because it will take you in and beyond!

All of Swami Satyananda Saraswati’s puja books are excellent. The “beginner” puja books (Durga, Shiva, etc.) are so clearly written, with instructions for each part of the puja, that one can immediately begin to do puja in the traditional way. After practicing for a while at the beginner level, one can then begin to explore the more complex rituals of Cosmic Puja or the Advanced Pujas translated by this same Swami. The fact that his main practice, both as a student in India and then as a swami both in India and the US, has been puja is part of what makes the puja books published by Devi Mandir so valuable. The material is accurately translated, not “watered-down” or “Westernized” and very accessible.

Puja means those actions that generate merit for the doer. And a formal puja or worship is a time-honored Hindu way of propitiating the deities and accumulating good merits. Usually puja traditions are passed down orally or recorded randomly. Swami Satyananda Saraswati has collected from various resources and compiled them into one neat offering. In fact this is one of the few books available in the West that explains and demystifies puja practices for the beginner. As an added bonus to the Sanskrit-shy folks, a companion CD is also available. There are newsgroups (http://groups.yahoo.com/group/devi_mandir ) that further help to explain finer nuances of the steps in the puja.
A great way to begin to explore your relationship with Shiva.

I want to recommend this book to all devotees of Lord Shiva. I started doing Shiva Puja little by little and I can really feel greater connection to Lord Shiva after doing Puja.

I learnt about Shiva Puja book through a friend who invited me to do puja with him. I enjoyed it so much that I immediately ordered for this book from the web site. I got it a few weeks ago and I am enjoying doing the puja every weekend. I wholeheartedly recommend this book for all devotees and for all families too, as it is fun to do as a group.

If you want to build a personal relationship with God this is the book to get. The instructions are simple and translation is clear and mantras are sublime! Jai Shiva!

I was doing Durga puja when I decided to add to my practices with this Shiva Puja book I absolutely enjoy it very much!!! I am grateful to Swami Satyananda for these and all other books that are so clear and easily accessible to all.