Everyone take notice! Shree Maa has a new cooking partner — it’s Swami Ram Kripaluji who has entered Her kitchen!

Everybody becomes a little child in Shree Maa’s presence, beginning from the greatest of Yogis, our own beloved Swami Satyanandaji, to the sweetest of sadhus, Swami Ram Kripaluji. 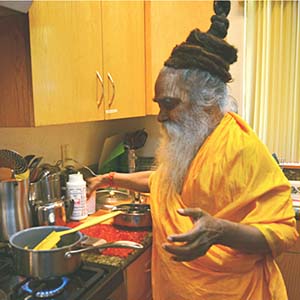 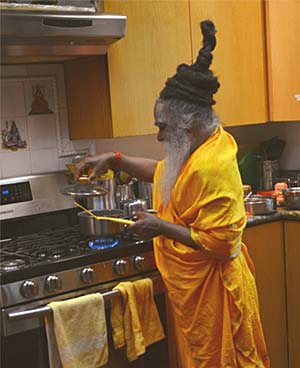 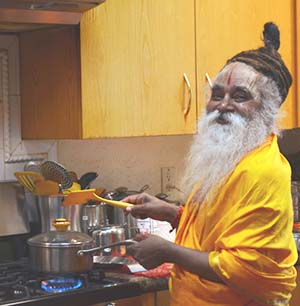 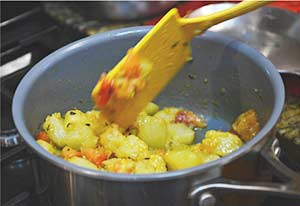 On his last visit, Swami Ram Kripaluji asked Shree Maa if he could make a vegetable for Her, kohlrabi. Shree Maa smiled and said, “When would you like to make it Swamiji?”

The day and time was decided. Ramya and others prepared the kitchen and ingredients and kept it ready for Swamiji.

Swami Ram Kripaluji himself was all smiles as he went to the stove and quickly started cooking.

A great festival of joy suddenly took place in the kitchen. What a delightful time Shree Maa, Ramya Maa, and others had with Swamiji.

Such a fun time they had in the kitchen that, at one point that afternoon, Swami Satyananda sent an email saying that he could hear them laughing all the way in his office!

Kohlrabi has many nutritional benefits, here are a few:

In this recipe, peel back the stems and fibrous layers until you reach the juicy center. Cut the center into cubes and fry it in spices. Yum Yum!

*Note: Indian 5 Spice, also called Panch Phoran, is a Bengali spice mixture used in many recipes. The spices are commonly found in Indian markets and include equal measures of: nigella seeds, black mustard seeds, fenugreek seeds, fennel seed, and cumin seed. You may mix these together yourself and store in an air tight container, or buy the masala blend from an Indian Store.

Directions
1. Cut Kohlrabi into 2 cm cubes and boil it until it is a little soft.
2. In another pan, put olive oil, wait for it to become hot, and add Indian 5 Spice and hing.
3. Add Kohlrabi cubes and stir.
4. Add turmeric powder and anise powder and fry for a few minutes.
5. Add tomato pieces and add salt to taste.
6. Add water and steam for five minutes.